NHL News : Report: Dylan Strome being pushed out of Chicago 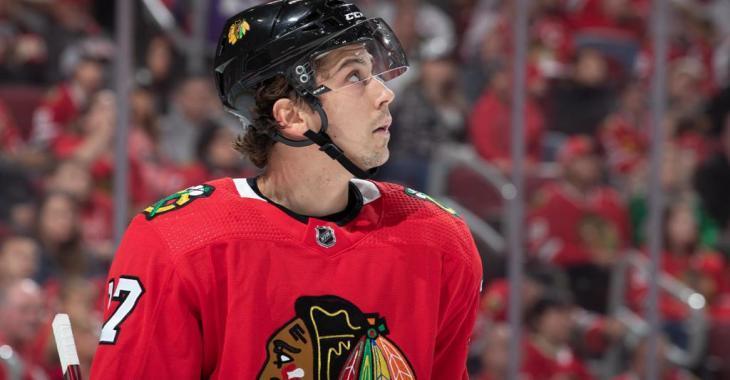 It sounds like Dylan Strome is not getting the role he is looking for in Chicago, which might have prompted the Blackhawks to place him on the trade block.

Per many insiders, with Elliotte Friedman and Frank Seravalli firsts on the news, Strome might not be with the Hawks much longer despite the fact that he is on his way to Colorado for the season opener against the Avalanche tonight.

The thing is that Strome was not a locked-in member of the lineup, rotating into the lines along with Adam Gaudette after Tuesday’s final practice of “training camp”.

The two aforementioned insiders reported that the Blackhawks were taking calls from interested teams about Strome and Pierre LeBrun confirmed the chatter during last night’s edition of Insider Trading on TSN, which could mean a trade is in the works.

“Keep an eye on the Chicago Blackhawks, they have a surplus at centre and the name that’s retaining attention around the league is Dylan Strome. There’s some teams kicking tires on him and I think there’s a chance that he moves here over the next week or two. The Hawks, of course, got Jonathan Toews back this year and we wish him well this year after a year off taking care of his health. Kirby Dach is healthy, of course they traded for Tyler Johnson from Tampa, so they got too many bodies, and so Dylan Strome is the guy I think they’ve earmarked to potentially move and I think that could happen here in the short term. Remember, third overall pick in 2015, how time flies [for] Dylan Strome.”

After being the third-overall selected in the 2015 NHL Draft behind Connor McDavid and Jack Eichel, Strome was quickly forgotten seeing that his level of play hasn’t risen to the levels of the two other picks. A slow start with the Arizona Coyotes got him moving between the AHL and NHL, before he landed in Chicago, where management might be now fed up to wait after his resurgence.

During the 2018-19 season, Strome took part in 58 games with Chicago and tallied 51 points after playing in 20 games with the Coyotes and racking-up just six points. He played in 58 contests during the shortened 2019-20 season, recording 38 points with three in the postseason, and then in 40 games last season, Strome tallied nine goals and 17 points.

Strome is now in his final year on his current deal with the Blackhawks at $3M, and clearly he needed to prove himself again to crack the roster. With the Hawks listening on trades, they could be looking to free up space for another young forward to make an impact at the NHL level.

This could also benefit Strome, who clearly isn’t playing the role he wants to in Chicago. We will keep an eye out on this rumour.

Leafs choke in the 1st round yet again, lose three straight games to Habs
Subscibe to
Our NEWSLETTER
Receive the best articles of the web directly in your email