NHL News : Report: Bergevin is not wanted back in Montreal

So much happening with the Habs and the season hasn't even started! 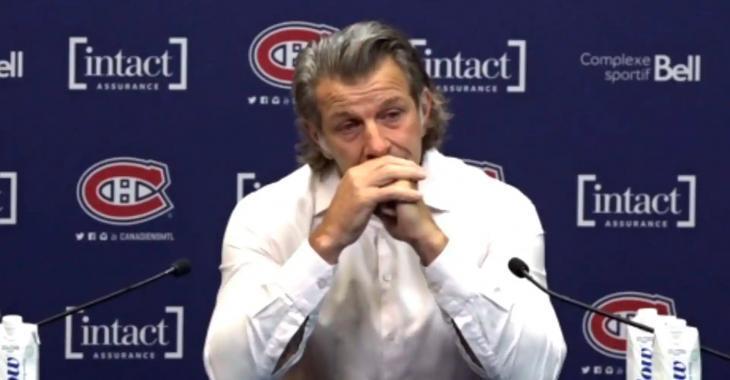 This is technically Marc Bergevin’s last year on his current contract to remain general manager of the Montreal Canadiens. There is no doubt that he would love to return, as TVA Sports’ Renaud Lavoie revealed last night on television that the GM bought a house in the Montreal suburbs hoping to be back next season.

However, it seems like owner Geoff Molson prefers to see him gone. Lavoie mentioned that the Habs’ owner is not looking to have Bergevin back as GM, before if he did, Bergevin would be re-signed already.

This surely echoes with what insider Pierre LeBrun hinted at last night in the latest edition of Insider Trading, speculating that this might be the last year fans get to see Bergevin at the reins of the Canadiens, especially with the team kicking off Thursday’s press conference about Carey Price with the note that Bergevin’s future with the club will not be addressed:

“And certainly there is no bigger story on this day, not just in Montreal, but in the hockey world than Carey Price’s well-being. But there was a pretty big hockey story on the side, and that was the Montreal Canadiens announcing at the start of that news conference that Marc Bergevin’s future would not be addressed until after the season. Those were the words by PR. So read into that that it appears Geoff Molson is shelving talks with Marc Bergevin until after the season. And read into that, at least I do, that there’s a greater chance than not now that Marc Bergevin is not the GM of this team after this season. I’m not saying that 100 per cent because certainly there could be a point this season where Geoff Molson decides to put a new offer in front of Marc Bergevin and he does extend him. But the fact that they spoke last January about his future and that there was an offer made in July that didn’t produce an agreement and the fact that Bergevin is now starting the season as a lame duck GM augments the chances of him not being GM after this year as opposed to signing an extension. Not over yet, but that’s where it is right now. That’s what I read into it.”

We all saw, not only in the moving press conference about Price on Thursday, but also in the postseason, how close Bergevin has become with his players.

While some insiders believe Bergevin might be asking too much to stay, you have to wonder if negotiations can be held to get both sides to agree. Darren Dreger pointed out that “contract negotiations have been going on for months now, term is not the issue, money is.”

After Crosby, another Penguin moves to the NHL’s protocol list right before the game
Subscibe to
Our NEWSLETTER
Receive the best articles of the web directly in your email