Personally, I'd love to see at least one playoff game where officiating is a non-factor. 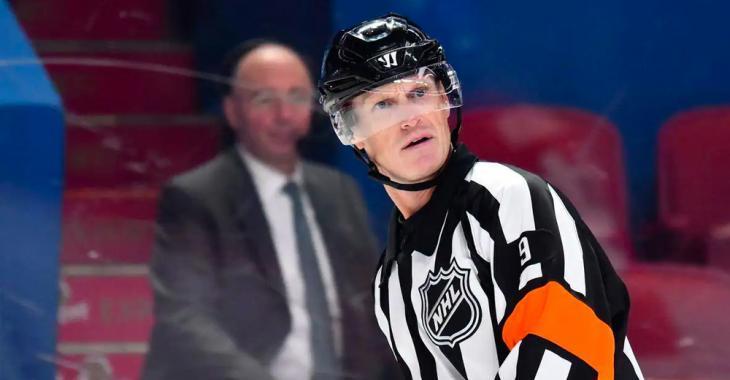 In case you missed yesterday evening, Tampa Bay Lightning superstar Nikita Kucherov was forced to leave Game 6 against the New York Islanders due to an apparent injury.

Kucherov appeared to have injured his ribs or back after receiving a wicked crosscheck from Islanders defenseman Scott Mayfield.

The play would go unpenalized and Mayfield would go on to score the game winning goal later in the game.

Oh... and I'd be remiss if I didn't mention that Mayfield got away with another unpenalized cross check late in the game on Lightning captain Steven Stamkos.

Referee Chris Lee watched both infractions and evidently felt that neither was worthy of a penalty. Why? Because according to Stamkos he was told by the officials that the cross checks weren't "malicious".

That's funny... I don't recall seeing the word "malicious" in the rule book?

Oh... and if Lee's name sounds familiar, it's because he was the official who put on an absolute travesty of officiating in Game 4 of the Vegas Golden Knights and Montreal Canadiens series. Seriously... how does this guy keep getting such plum assignments?

Well... it seems that nearly 30,000 Canadiens fans are wondering the same thing. Over 27,000 fans have signed an online petition calling for Lee to be fired by the NHL.

“In recent years, we have already noticed Chris Lee for the wrong reasons in the hockey world,” wrote petition author Olivier Tetreault. “In the last two games... we have seen so many occasions Chris Lee's inability to do his referee work in the NHL.”

As of Wednesday afternoon, 27,070 people have agreed with Tetreault.

“This ref has no place in the NHL he is a disgrace to the game,” wrote one commenter.

“His incompetence is so obvious, if (NHL Commissioner Gary) Bettman doesn't see this then he is also part of the problem,” wrote another.

Much of the controversy comes from Lee's officiating in Game 4 of the series in which Lee literally "looked the other way" on several non-calls that benefited the Golden Knights.

The referees for Game 6 tonight in Montreal have not been chosen, but it's probably safe to say that Lee will be watching the game from his couch at home. If the NHL were to schedule Lee to officiate Game 6, it would set off an absolute powder keg of controversy. And that's saying nothing about the actual outcome of the game. If he were to ref and blow another call that leads to a Vegas win it would truly be a travesty and I think you'd have a lot of people correctly calling out the NHL. In short, the NHL can't put itself in that position.

I can't reasonably say whether or not Lee is fit to continue his job as an NHL referee, but I can definitively say that he should 100% NOT be officiating any games involving the Canadiens anytime soon. It's simply too sensitive of a situation right now and the NHL would be wise to avoid the situation entirely by leaving Lee at home on the couch.

Rumor: Proposed 1 for 1 trade between the Penguins and Sabres.
Subscibe to
Our NEWSLETTER
Receive the best articles of the web directly in your email