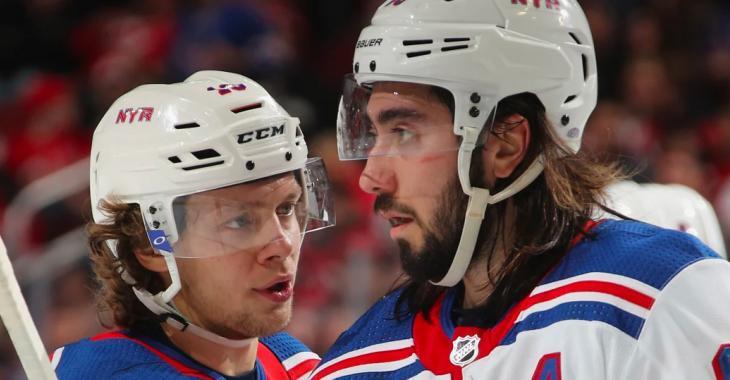 On Friday, the St. Louis Blues acquired forward Pavel Buchnevich from the  New York Rangers in exchange for forward Sammy Blais and a 2022 second-round pick.

There had been chatter that the Blue Shirts were looking to move Buchnevich, but it is still hard to swallow that NYC has just lost 20-goal scorer.

The 26-year-old forward is a pending restricted free agent after he tallied a career-best 48 points (20 goals, 28 assists) in 54 games for the Rangers last season. He spent his first five NHL seasons as a member of the Blue Shirts, recently completing a two-year, $6.5 million deal.

The Rangers needed to make room on their cap availability and it seems almost certain that Buchnevich was going to be the victim of his own success.

However, in this transaction, it feels like the return is surprisingly low value… Insider Rick Carpiniello for the Athletic believes star players like Artemi Panarin, Chris Kreider and Mika Zibanejad are not going to be happy with losing Buchnevich for so little.

Buchnevich was extremely popular with his teammates (and the fan base), especially Panarin, Zibanejad and Kreider.

The Rangers needed to find a cheap option on the bottom six and Blais can be that player. He has one year left on a two-year, $3 million deal signed before last season. He is 25 years of age and will be an arbitration eligible restricted free agent at the end of this season.

He appeared in 36 games last season, his fourth in the NHL, and had eight goals and seven assists. He is a talented bottom six and his cap hit is a good fit for the Rangers.

Panarin, Zibanejad and Kreider will have to cheer up…

Huge update on Kirby Dach just before game time!
Subscibe to
Our NEWSLETTER
Receive the best articles of the web directly in your email