NHL News : Rangers’ Mika Zibanejad gets benched and his teammates respond in the best way possible! 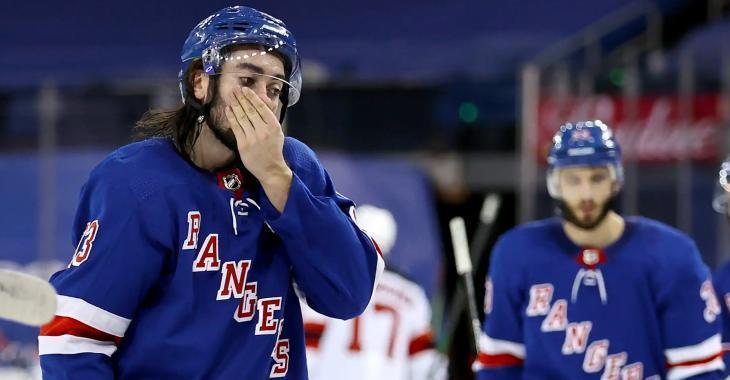 There is always a strong reaction when John Tortorella benches one of his players, however, it is sorta expected by now. When New York Rangers head coach David Quinn benched his star player Mika Zibanejad on Thursday : that is another story. Quinn dramatically reduced Zibanejad’s ice time in the first period before sitting him for the first 10:46 of the second.

Zibanejad was left on the bench helpless as the New Jersey Devils only could build a 1-0 lead thanks to Igor Shesterkin’s exceptional play in net. Finally the Blue Shirts rallied back to win 6-1, and Quinn had to explain his reasons for benching Zibanejad.

“I didn’t love his game, I didn’t love what we were seeing — I didn’t love a lot about our first period — but obviously he’s had a tough start to the season and maybe sitting him for a while would give him a little jolt and give our team a little jolt,” Quinn said to the New York Post. “I did like what I saw when he came back out.”

His teammates were stunned to see him left on the bench and answered back. Chris Kreider, who recorded a natural hat trick, had this to say about his teammate and how he needs to be appreciated more than what fans see on the stat sheet.

“A lot of you guys have been mentioning Mika, but I think that whole line (Zibanejad, Lafrenière and Pavel Buchnevich) has been playing so well,” Kreider said, per The Athletic “I think Mika’s been playing really well. I mean, the guy scored 40 in how many games last year? People … it’s no secret. He gets isolated. He’s opening up a ton of space for those guys and he’s working his butt off, doing an unbelievable job on the penalty kill and helping us win hockey games. So, no offense to you guys, but I’m sick of hearing that narrative. I think he’s been doing a terrific job.”

Coach Quinn believes he gave Zibanejad a wake up call and we should see more production from the star player in the coming games. It sure gave his Rangers’ teammates an additional reason to fight and win the game.

“I think anytime you sit one of your top players that certainly gives everybody a bit of a wake-up call and I just thought we got better as the game went on,” the coach said.

Habs confirm the Tyler Toffoli injury is worse than originally reported.
Subscibe to
Our NEWSLETTER
Receive the best articles of the web directly in your email