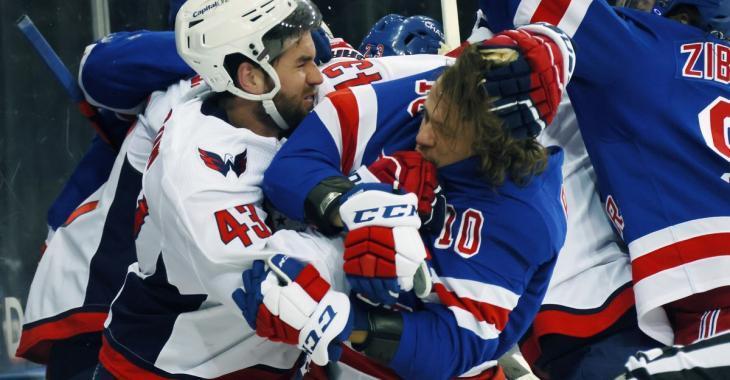 The New York Rangers have made several changes for the upcoming season, most recently hiring Gerard Gallant as their next head coach, to make sure the team can once again be a top contender.

The Rangers fired coach David Quinn and three of his assistant coaches in May. General manager Jeff Gorton and team president John Davidson were also let go in May. Former player Chris Drury has since been promoted, holding both the GM and president roles.

Sportsnet’s Jeff Marek and Elliotte Friedman believe more work needs to be done and discussed on Tuesday the focus of addressing what they called the “Tom Wilson Problem.”

As you may remember, Wilson was fined $5000 this season for punching New York Rangers forward Pavel Buchnevich in the back of the head as he was facedown on the ice, while also throwing star Artemi Panarin to the ice in the ensuing scrum. When the teams faced off again days later, a line brawl featuring all six forwards erupted on the ice in the opening seconds of the game. Three more broke out in the first period alone, including Wilson taking on Rangers defenseman Brendan Smith. It was madness.

It was a good opportunity to see how the Rangers lack grit and toughness and the two insiders wonder if the Rangers will take a close look at this during the summer. Friedman believes Drury has that priority on his offseason list.

As Friedman points out, the issue isn’t juste with the Capitals’ tough forward, but something the Rangers seem to lack all season long. It will be interesting to see what player gets added to the roster to ensure star players aren’t touched and that the Blue Shirts have an edge and big guys to put in front of the net.

We’re not sure the term “Tom Wilson Problem” has made it to the ears of the Capitals’ forward, but we bet he’d love it.