No changes for Tony D. 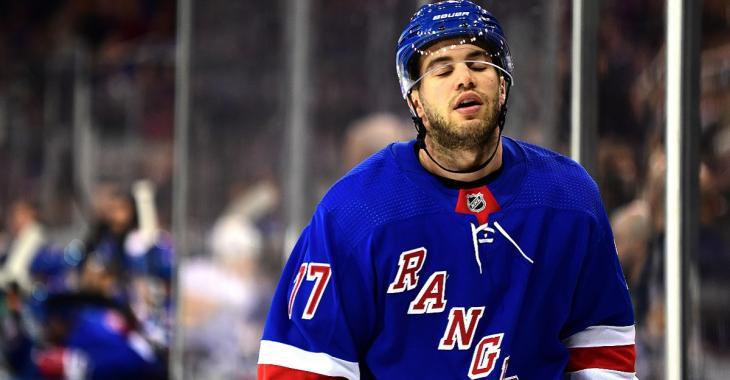 After what has been a very tumultuous week the New York Rangers are likely looking forward to their season coming to a merciful end this afternoon when they play their final game of the regular season against the Boston Bruins.

A failure to deliver on the ice this season has resulted in the dismissal of long time Rangers executives John Davidson and Jeff Gorton, and this has come at a time when the Rangers willingly left a relatively valuable asset on the sidelines for the majority of the season. Whether you like the man or not, the Rangers made the rather unusual decision to effectively scratch defenseman Tony DeAngelo since he was placed on waivers back in February leaving the team without what they valued as a 4.8 million dollar player when they last signed him to a contract.

Many have wondered what the future will hold for DeAngelo now that former Ranger Chris Drury has been given the reins of the organization, but in spite of a change in leadership within the organization it sounds like DeAngelo will remain in limbo moving forward.

Rangers insider Larry Brooks reports on Saturday that a source has informed him that the new administration will not result in a change of status for DeAngelo, something that would appear to indicate he has played his final game as a member of the Rangers. Although the team is no doubt hoping that he could be picked up by the Seattle Kraken in their upcoming expansion draft, it would appear as though the plan continues to be a buyout of DeAngelo's contract.

This would effectively make DeAngelo an unrestricted free agent come the offseason and I suspect that in spite of his issues both on and off the ice, his ability to play the game will likely result in at least one team in the National Hockey League taking a gamble on his services. Given the fact that the NHL salary cap will once again remain flat I suspect that DeAngelo will have to take a significant, and perhaps even a very significant, pay cut in order to remain in the league. On that same note teams will need players to fill roster spots on relatively cheap contracts in order to meet those salary cap demands, and that could very well be the next step for DeAngelo in his controversial NHL career.

Wild cut 8 players from their training camp roster on Sunday.

New job for Henrik Lundqvist and Rangers fans are going to love it!
Subscibe to
Our NEWSLETTER
Receive the best articles of the web directly in your email