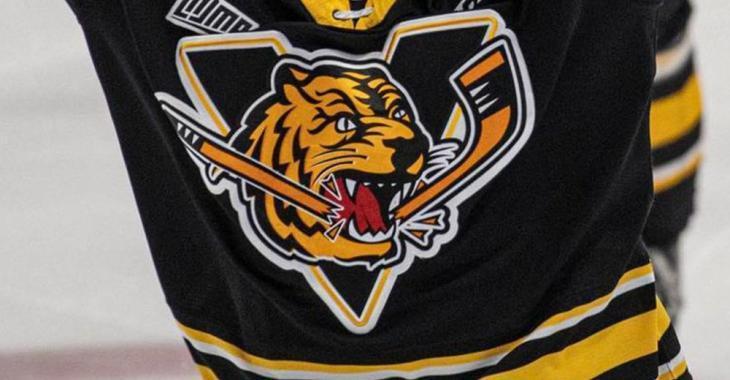 Victoriaville Tigres players Nicolas Daigle and Massimo Siciliano will reportedly be charged today for allegedly sexually assaulting a minor and producing a recording of the alleged assault during the team's President's Cup victory party back in June, 2021.

The Tigres and the QMJHL both confirmed today that Daigle and Siciliano will be facing criminal charges as a result of these allegations.

"The Quebec Major Junior Hockey League was made aware of criminal charges against two players from the Victoriaville Tigres stemming from potential actions that occurred in June 2021," the league's statement reads. "These accusations are taken very seriously, and the Commissioner’s office will take the time to go through the case file brought before the Court. A decision will be communicated within 48 hours regarding the status of these two players."

Shortly after their league championship in June, the Tigres announced that two unnamed players were being investigated for sexual assault allegations following an alleged incident at the team's championship party. At the time, the team refused to name the players are simply released a short statement:

"The Victoriaville Tigres organization was informed yesterday of the filing of criminal charges against two of its players. The organization is currently in close contact with the Quebec Major Junior Hockey League (QMJHL) working to determine the details of the charges and the status of players on the circuit."

"The Victoriaville Tigres take these accusations very seriously and will continue to cooperate with the authorities in this matter."

Needless to say that these are very, very, VERY serious allegations. It's also worth noting that Daigle is facing two additional charges of sharing images or video of the alleged victim.

Again... these are just allegations and nothing has been proven, but just the allegations themselves are enough to make you feel sick to your stomach.

First up we had the entire Logan Mailloux controversy earlier this offseason and now we get this. Again, innocent until proven guilty but I can't help but feel like we're going to see and read some disturbing allegations once this case goes to court.

Obviously, these two young men will not be playing in the QMJHL this season, either by choice or by verdict, but we'll still await the league's formal decision on their suspension/expulsion. More to come.

New projected start date for 2021 season revealed!
Subscibe to
Our NEWSLETTER
Receive the best articles of the web directly in your email