The 18 year old pays the price for his disgusting behaviour. 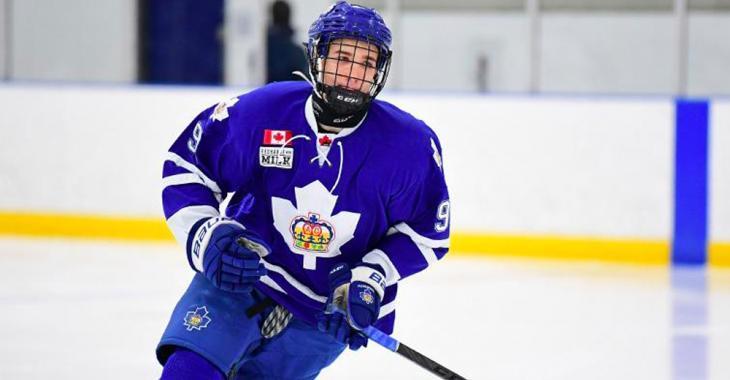 NHL prospect Logan Mailloux has announced that he will NOT be available to be drafted later this week at the 2021 NHL Entry Draft, officially renouncing himself from the draft.

In case you were unaware the 18 year old Mailloux was charged in Sweden after distributing a photo of a woman and himself engaged in a sexual act. The photo was taken without the women's consent. Mailloux reportedly snapped a photo of an 18 year old woman giving him oral sex without the young woman's consent and then shared that photo with his friends and teammates. The woman was then reportedly harassed online by said friends and teammates.

Here's what Mailloux has to say for himself:

"Being drafted into the NHL is an honour and a privilege that no one takes lightly. The NHL Draft should be one of the most exciting landmark moments in a player's career, and given the circumstances I don't feel I have demonstrated strong enough maturity or character to earn that privilege in the 2021 Draft. If I were to ever have the honour of being selected I would want a fanbase to be proud to welcome me to their organization. I know it will take time for society to build back the trust I have lost, and that is why I think it is best that I renounce myself from the 2021 NHL Draft and ask that no one select me this upcoming weekend. I feel that this would allow me the opportunity to demonstrate an adequate level of maturity and character next season with the London Knights in the OHL and provide all the NHL teams the opportunity to reassess my character towards the 2022 NHL Draft."

Funny... I don't see an apology or any responsibility being taken here for his actions.

Katie Strang of The Athletic managed to get a one on one interview with the victim and from her perspective, Mailloux still doesn't understand the gravity of the situation and has yet to apologize for his actions.

“I do not think that Logan has understood the seriousness of his behavior,” said the woman in an email.

The woman said she asked that Mailloux send her a sincere apology in written form because she did not want to meet with him in person. She said she received “a text that was no longer than three sentences.”

“All I wanted was a heartfelt apology for his behavior,” the woman wrote to The Athletic.

And for anyone out there saying that this is just a case of "boys being boys", first off... gross. This is slime ball behaviour at any age and shows a complete lack or respect. Secondly, it's against the law. Mailloux has been charged with defamation and "offensive photography constituting an invasion of privacy".

For what it's worth Mailloux was ranked 23rd among North American skaters for the upcoming draft.

Rumor: Trading Duncan Keith only the first part of a much bigger plan from the Blackhawks.

$38.5 million contract for Hyman in Edmonton after Leafs refuse sign and trade!
Subscibe to
Our NEWSLETTER
Receive the best articles of the web directly in your email