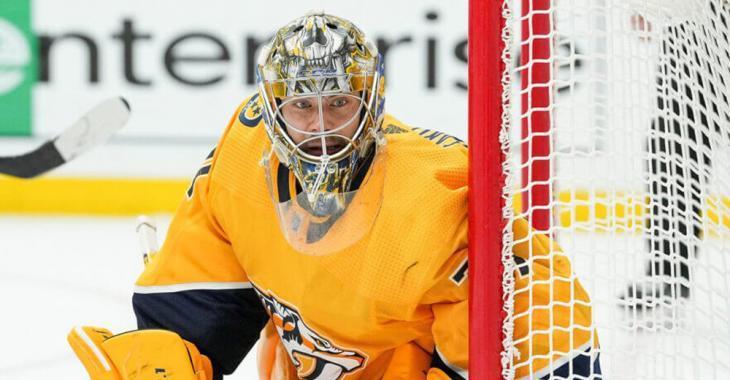 The future in the crease for the Nashville Predators is now.

The Pekka Rinne era is officially over, as the winningest goaltender in the history of the franchise officially called it a career this summer. And the man they drafted as his heir and eventually supplanted as the starter is now officially under contract for another four years.

Juuse Saros officially agreed to a four-year, $20 million contract with the Predators earlier today, avoiding his salary arbitration hearing that had originally been scheduled for Monday.

"Juuse has proven himself as one of the best young goaltenders in the NHL, and we are very pleased to have him remain our No. 1 goaltender for years to come," Predators general manager David Poile said. "While being mentored by Pekka Rinne, he has spent the last several seasons growing and taking steps physically and mentally to become a top goalie in this League, as evident by his spot on the NHL's All-Rookie Team in 2017-18 to finishing near the top of Vezina Trophy voting this past season."

Saros recorded a respectable record 21-11-1  a 2.28 goals-against average, .927 save percentage and three shutouts in 36 games with the Predators during the shortened 2020-21 NHL Season, and was also their starter for their Round 1 Stanley Cup Playoffs loss to the Carolina Hurricanes. He went 2-4 with a 2.78 GAA and .921 save percentage in the six games, while also setting the franchise record with 58 saves in Game 4.

Thanks to his efforts, he finished sixth in the Vezina Trophy voting as the League's top goaltender, and 11th in the Hart Trophy voting for most valuable player.

"Juuse gives our team a chance to win in every game he plays, and we feel confident that with him leading the tandem we've established with David Rittich (signed one-year contract July 28), our goaltenders will be a large part of our success in 2021-22," Poile said.

Jaroslav Halak is leaving the Boston Bruins.
Subscibe to
Our NEWSLETTER
Receive the best articles of the web directly in your email