NHL News : Players from Canadian teams, including McDavid, head back to Canada for training camp 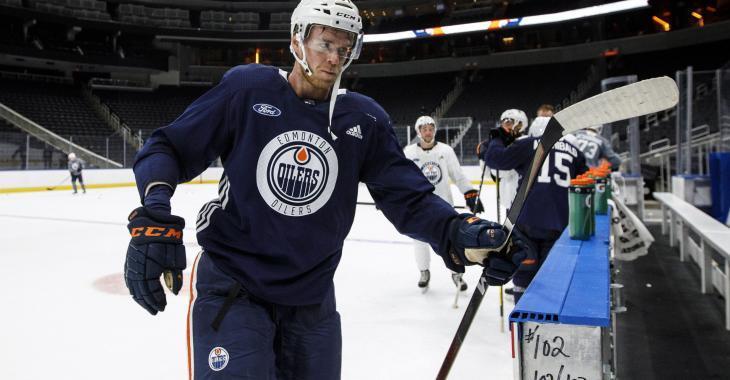 There are so many details still to iron out for the 2021 season in the National Hockey League, however, we are starting to wonder if there is a new sense of hope ever since senior hockey writer Frank Seravalli reported last night on Insider Trading on TSN that some players from seven Canadian clubs are heading back to Canada at the moment.

For now, one of the details that remains unknown is if format for the NHL season though an all-Canadian division appears likely given the country’s current border restrictions.

Seravalli shared the good news that some players are starting to gather in their team cities to be ready just in case, which sounds quite promising in all of this uncertainty.

“An interesting group of players gathered in Arizona. Auston Matthews, of course, put together a skate there. Connor McDavid participated. Other NHLers said to include the likes of Anthony Duclair and Matt Dumba. At times there were 10, maybe 15 players of NHL calibre, AHL calibre on the ice at one time. Connor McDavid has since returned to Canada this week, but players are doing whatever they can do to stay in shape when the dates come in from the NHL.”

McDavid, who was diagnosed with COVID-19 earlier this offseason, is more than ready for the season to get underway. We bet he will be looking to gets his Edmonton Oilers back on track to take a real run at it in the Stanley Cup playoffs. The Oilers didn’t get past the qualifying round this summer after they were ousted prior to the First Round by the Chicago Blackhawks.

Clearly, the Oilers’ captain is more than ready and willing to get back to Canada in order to be ready and in shape for the start of training camps.

Earlier this week, it was reported that players across the NHL weren’t thrilled about the idea of camps taking place close to the Christmas holiday. However, with celebrations and family gatherings pretty much on hold and forbidden across Canada, this might be the perfect excuse for McDavid and other players from Canadian clubs to continue their training and be ready for the start of the season.

Whenever that is… Though there was good news earlier on Friday when TSN Senior Hockey Reporter Frank Seravalli reported that the NHL has shared draft schedules with the NHLPA on Thursday, including a 56-game season outline.The season could kick off on Jan. 15th. Fingers crossed.

Bettman finally opens up on NHL's plans for jersey advertising

Buffalo Sabres are “wide open for business.”
Subscibe to
Our NEWSLETTER
Receive the best articles of the web directly in your email