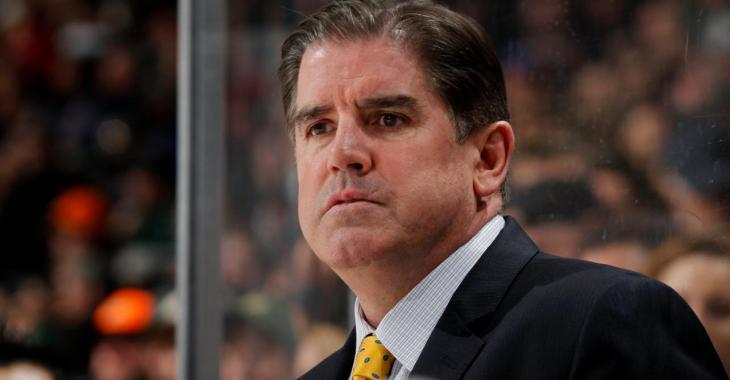 In an article we published earlier today I mentioned that there was likely going to be a big fight over the potential suspension of Washington Capitals forward Tom Wilson, and these most recent comments from Capitals head coach Peter Laviolette indicate to me that this is exactly where we are going.

Wilson was offered an in person hearing by the National Hockey League's Department of Player Safety, something that is done almost exclusively when the league intends to argue for a suspension of 6 or more games, but it now seems clear that the Capitals do not agree. In fact the comments made by Laviolette today appear to suggest that they do not feel Wilson should be suspended at all.

"I guess we're still hopeful. I mean, to me, it was a hockey hit," said Laviolette on Saturday. "If this is a suspendable play then all hitting is going to probably have to ve removed because he didn't take any strides, he didn't target the head, a player was up against the boards, he was upright and Tom hit him hard. I hope the player's OK, but, for me, the call I think was correct on the ice last night. This hit happens so many times through the course of the game where somebody hits somebody against the boards and so I think we're still hopeful that Tom Will we available to us."

The comments from Laviolette came in response to a question regarding the timing of Wilson's hearing, something that the league has not yet set a date for. Additionally when Laviolette says that he is hopeful that Wilson will be with the team, he is referencing the Capitals upcoming game against the Philadelphia Flyers which is set to take place on Sunday. I would suspect that this is extremely unlikely given that the league offered Wilson an in person hearing, but there has been a big divide in the hockey community online over this hit.

One NHL analyst, insider Frank Seravalli, has also argued that Wilson did not violate the rules of the game, due to the fact that he made contact with Carlo's torso and shoulder prior to driving his head into the boards.

The Seattle Kraken may draft Carey Price.
Subscibe to
Our NEWSLETTER
Receive the best articles of the web directly in your email