NHL News : Perfect trade scenario put together to get Tkachuk out of Calgary!

It sounds like the trigger could be pulled on this one… 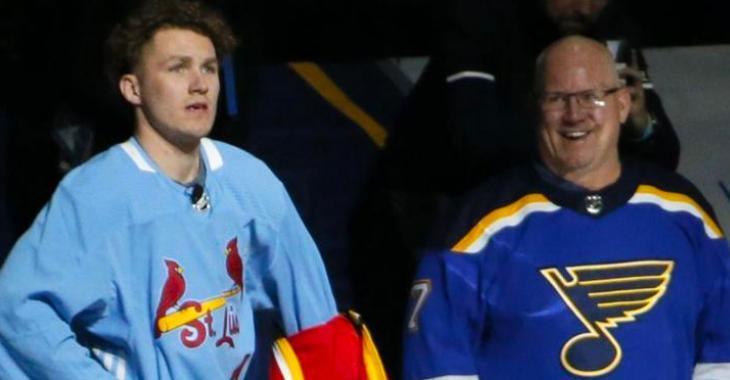 This rumour got fans wondering and even the Calgary Flames might think this is the right time to make a move. On Tuesday, Sportsnet analyst and former NHLer Shane O’Brien reported that Flames forward Matthew Tkachuk “might want out of Calgary” this offseason.

O’Brien made the remark during the Powerplay Podcast with Steve Kouleas in a larger discussion about the Flames and their future, prompting many to wonder if in fact Tkachuk could be moved this offseason. And now, not 24 hours after being put on the apparent trade block, there are multiple online reports that the St. Louis Blues are very interested in Tkachuk’s service.

This is the perfect trade scenario for Tkachuk, who has apparently mentioned more than once his desire to play for his hometown of St. Louis.  Then, the trade scenario got even more real when it was mentioned that the name of forward Vladimir Tarasenko has been floating around and could be the right time for the Blues to let him go.

“I think [Tarasenko’s] time’s up,” O’Brien said. “I got a little rumour, I guess here [Kouleas] and for Dwayne. I got Tarasenko going to Calgary for Tkachuk. I heard Tkachuk wants out of Calgary, Tarasenko’s time’s up there, I think that’s a trade that could happen.”

“I’m hearing more on the end that [Tkachuk] wants to play in St. Louis, his hometown,” O’Brien added. “I just think the time is it for a change in Calgary, is it going to happen? I don’t know, but I just heard some rumblings that it could be a Tkachuk for Tarasenko thing and that’s in the silly season as you would call it, [Kouleas].”

There is no doubt that the Flames would have to carefully consider this one. Tkachuk is a 23 year old power forward who already has a 30+ goal and 70+ point season under his belt. He oozes confidence and leadership. In short: he’s been everything the Flames could have asked for. There’s just one problem… his contract is up. He is entering the final season of a three-year deal he signed with the Flames that carries an annual average value (AAV) of $7-million. Tarasenko has two years left on his current contract which pays him $7.5-million per season. He also has a no-trade clause worked into his deal. Both Calgary and St. Louis are projected to have more than $14 million in cap space for 2021-22, per Cap Friendly.

Not to mentioned that Tarasenko is six years older than Tkachuk and has undergone several shoulder surgeries that could stop him from returning to his past glories. Due to injuries, he’s been limited to just 34 games played over the last two seasons.

If the Flames are considering this move, they would have to ask the Blues to give up more to acquire the hometown talent, but this could be a good starting point for both parties.

There has been chatter that the Flames are looking for a chance to be true contenders in the coming season, however, this might be an even bigger change than anyone expected this summer.

What do you make of this scenario that would get Tkachuk playing for his hometown team where his father Keith is serving as an amateur scout and Director of Player Recruitment with the organization?