NHL News : Penguins to go after major boost up front as insider calls for this trade

Would you pull the trigger or is it too risky? 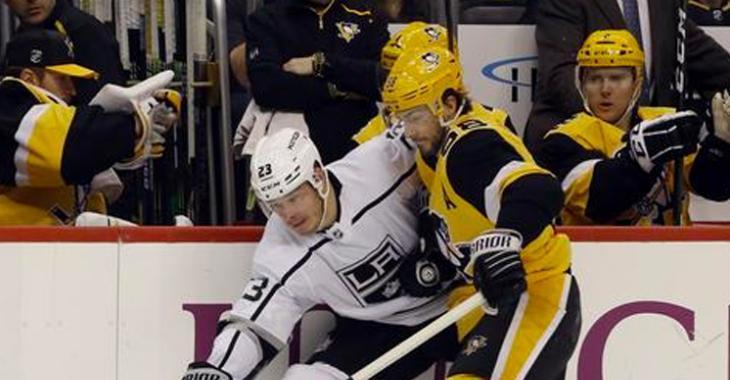 Trade season is open wide in the National Hockey League and discussions around which players might be moved and where they might end up have picked up considerably as a result. This latest trade proposal comes courtesy of NHL insider Scott Burnside and it would be a blockbuster indeed, especially if it goes in one of the directions he has proposed.

He suggested that the Pittsburgh Penguins go after a major boost on the back end and acquire Los Angeles Kings veteran forward and fan favourite Dustin Brown.

We have to admit we can see where he gets the idea: with Ron Hextall as the new Pens’ general manager, he might want to get his hands on his former player in LA. We know Hextall and Brian Burke were ordered to get another championship in Pittsburgh and could be pushed to make a blockbuster move. Here is how Burnside explains it:

“Given the overloaded state of the Pittsburgh blue line maybe there’s a young defensive bauble that satisfies the Kings end of things.

Brown could help improve the Penguins’ power play. There’s also something of the Patric Hornqvist in Brown. Gritty, solid, the kind of guy who would immediately be embraced in the Pens’ room. Hornqvist looked like he was at the end of his tether in Pittsburgh but has been revitalized in Florida. Brown fills that kind of niche for the Penguins and might be the kind of piece that is a catalyst to something that delays what many believe is a complete teardown in Pittsburgh.”

Brown is “is having a renaissance season and has one year left on his current deal at a hefty $5.875 million. The Kings might eat some of that depending on what kind of piece gets sent back.”

This could get the Penguins thinking…After all, the guy has two Stanley Cups and could bring the needed support to both Sidney Crosby and Evgeni Malkin.

So… would you pull the trigger or is it too risky?

Rumblings of a huge trade between the Red Wings and Lightning.

Update: Eichel out long-term, seeking a second opinion
Subscibe to
Our NEWSLETTER
Receive the best articles of the web directly in your email