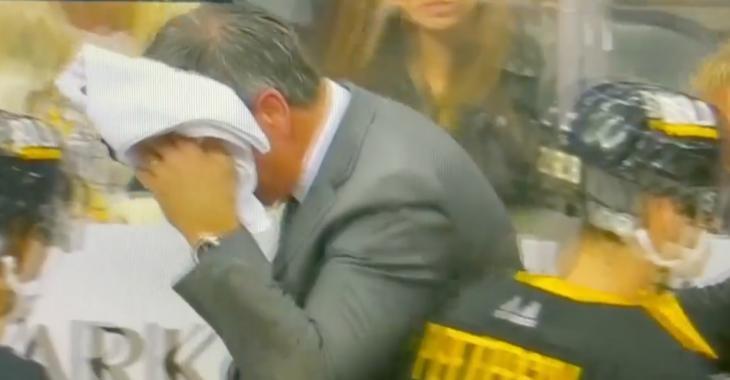 The head coaches around the NHL may still be wearing face masks behind the bench : Pittsburgh Penguins’ Mike Sullivan would have needed a helmet on Tuesday night against the Buffalo Sabres.

At the very start of the third period, Sullivan was hit in the head by a redirected puck and was bleeding heavily on his way down the tunnel. He put a towel up to his forehead and was quick to leave to get repairs.

The puck appeared to hit him near the left eye. Check it out:

But he is a true hockey guy as he missed just 10 minutes of action and returned behind his players’ bench for the remainder of the game. He came back just in time to see his team tie up the contest at 3 thanks to Radim Zohorna’s tap-in goal, on the superb two-on-one feed by Kasperi Kapanen.

He got stitches and moved on. What a soldier!

The NHL approuves draft lottery changes : only the top 2 spots will be determine by draw!
Subscibe to
Our NEWSLETTER
Receive the best articles of the web directly in your email