NHL News : Paul Maurice defends Scheifele, calls play on Evans a “heavy hit for sure, but it was clean.” 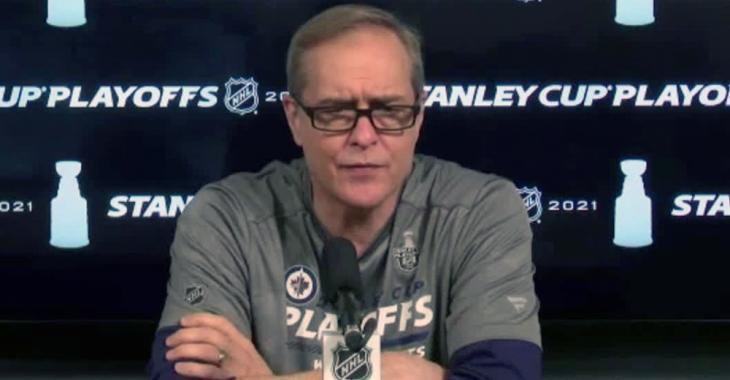 In case you missed it last night, Montreal Canadiens forward Jake Evans was stretchered off the ice after receiving an absolutely devastating body check from Winnipeg Jets forward Mark Scheifele.

Scheifele was assessed a five minute major penalty for charging and a game misconduct. He's also facing a potential suspension after NHL Player Safety scheduled a hearing with him set for later this afternoon. He's likely looking at a game or two suspension as a result of his careless hit. And don't get me wrong... I don't think Scheifele is entirely to blame on this hit. Is it a bad hit? Absolutely. Should he be punished? Absolutely. But I'd also argue that Evans bears some responsibility on this hit, as well. I strongly feel that the onus of safety must be placed on both players when talking about a big hit. And you know what? I'm not alone in my thinking.

It's really no surprise but Jets head coach Paul Maurice feels that Scheifele's hit was hard, but still clean and he's not expecting any supplemental discipline from NHL Player Safety.

Now, take Maurice's opinion with a grain of salt considering that he's Scheifele's coach, but I can't say that I disagree with him completely. There's no denying the fact that Scheifele came from too far away (charging) and clearly took advantage of a player in a vulnerable position. There's also no denying the fact that Evans put himself in that position. He has his head down, he has no awareness of Scheifele's positioning and he is 100% eligible to get ROCKED by putting himself in that position. Now... is he eligible to get blown up from 15 feet away? No, that's why there was a penalty on the play. But I'm not convinced that this is a no-brainer suspension type play. Frankly, I wouldn't be surprised if Scheifele gets off easy with a fine or a single game suspension.

Again, the onus on safety has to be shared by both parties and they both neglected safety of this particular play. Evans exposed himself and Scheifele took things too far. Frankly, it'll be fascinating to see what kind of discipline comes as a result of this.