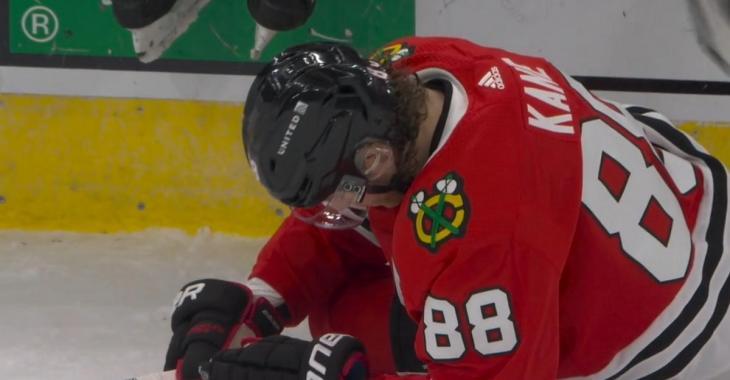 It has been a rough night for some of the National Hockey League's top stars and they are unfortunately not getting much help from the officials.

In the case of Patrick Kane the hit came courtesy of Detroit Red Wings Robby Fabbri and in my estimation this was the more egregious of the two, both because of the hit itself and because of the non-call from the official who appeared to be staring right at the play. Thankfully for the Blackhawks Kane would be ok and would get back to his feet pretty quickly, but you can tell from the expression on his face that he was not at all pleased about this shot to the mouth.

I say shot to the mouth because that is where Kane appeared to indicate he had been hit, placing his hand over his chin and jaw.

The hit on Leon Draisaitl came courtesy of Toronto Maple Leafs forward Pierre Engvall and unlike the Kane hit this one came along the boards. The initial hit actually seemed like a relatively clean check along the boards, but as you can clearly see towards the end of the contact the elbow from Engvall catches Draisaitl up high, provoking a reaction from the Oilers star.

I don't expect that the NHL's Department of Player Safety will take a look at these hits, they both were relatively mild and neither led to an injury, but considering neither hit was called on the play it does remain a possibility.