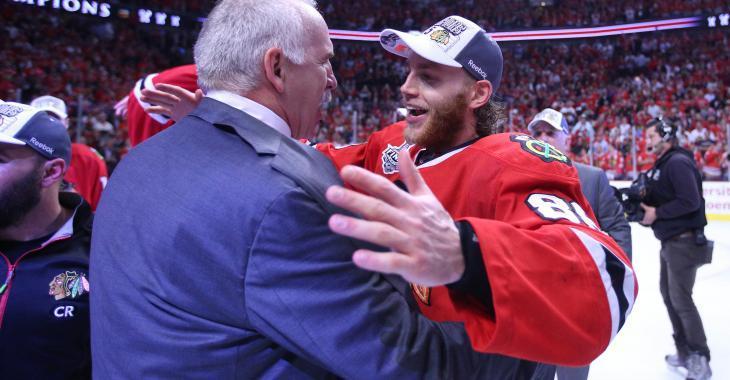 Patrick Kane celebrated 1,000 games with the Blackhawks in Chicago on Tuesday night. While fans weren’t in attendance to take part in the special milestone, Kane’s parents, girlfriend Amanda and son were and someone else made sure to be there.

Before puck drop, Kane was honoured by his team and since the game was against the Florida Panthers, Kane was able to share a special moment with former head coach Joel Quenneville, who is now the bench boss for the Cats.

As Kane skated around the ice to shake off the emotions, he crossed Quenneville on the opposite bench and nodded at him. It is easy to tell how much Kane appreciated to see his former coach there to celebrate with him.

Great stuff. Check it out:

As the only player in the top nine American-born scorers who’s yet to play 1,000 games — and as a three-time Stanley Cup champion — Kane is widely recognized as one of the all-time greatest players from the United States.

And Quenneville knows how special he is.

Rumor: Zach Bogosian walking away from the Maple Leafs.
Subscibe to
Our NEWSLETTER
Receive the best articles of the web directly in your email