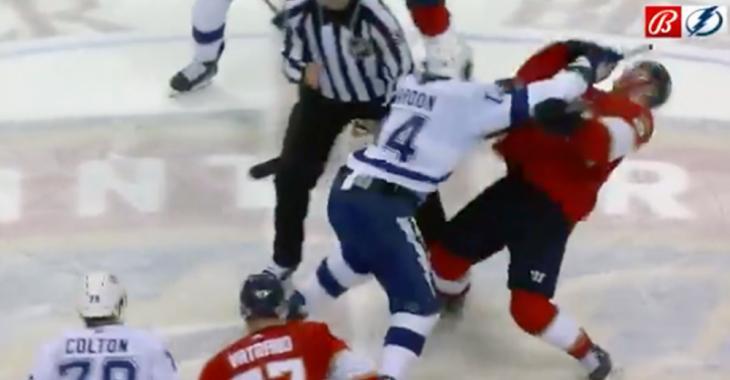 This just in, Tampa Bay Lightning forward Pat Maroon and defenceman Ryan McDonagh have BOTH been fined by NHL Player Safety following last night's loss in Game 5 of the team's opening round Stanley Cup Playoff series against the Florida Panthers.

In Maroon's case, he was suspended for "unsportsmanlike conduct" stemming from the game's final faceoff in which he went directly at Panthers centerman Noel Acciari, with no regard for the puck or the play.

You may recall that Maroon called out the Lightning for being "chicken" after Game 2 earlier in the series.

I'm willing to bet that that little chicken dance put Maroon on thin ice with NHL Player Safety. So when George Parros, head of NHL Player Safety, saw Maroon go over the line in the final seconds of last night's game, it was an easy decision for him to hand out a fine.

In McDonagh's case, he absolutely obliterated Panthers defenceman Mason Marchment with a brutal retaliatory cross check to the face.

I get that McDonagh is just trying to protect himself after getting blown up by Marchment, but you can't get your stick up in someone's face like that. You take the hit, you take a number and you go about your business. Credit NHL Player Safety for getting things right here. By all accounts Marchment is not injured and will play in Game 6, so there's no need to dole out a suspension. McDonagh's wallet is a little lighter now and, like Maroon, he's been put on watch by NHL Player Safety.

By the way, if you're like most hockey fans and you've slept on watching this series do yourself a favour and tune in for Game 6. The crowds in Sunrise and Tampa have been electric for all five games so far and the games have been absolutely outstanding. Big goals, big hits, big saves... it really is the series that has it all. A lot of old school hockey traditionalists might scoff at watching playoff hockey between Floridian teams, but this is some excellent hockey regardless of the locale. Game 6 is shaping up to be an absolute must watch game.

Flyers and Kraken working on a deal involving Tarasenko.
Subscibe to
Our NEWSLETTER
Receive the best articles of the web directly in your email