They’re not going to bite, Pat! 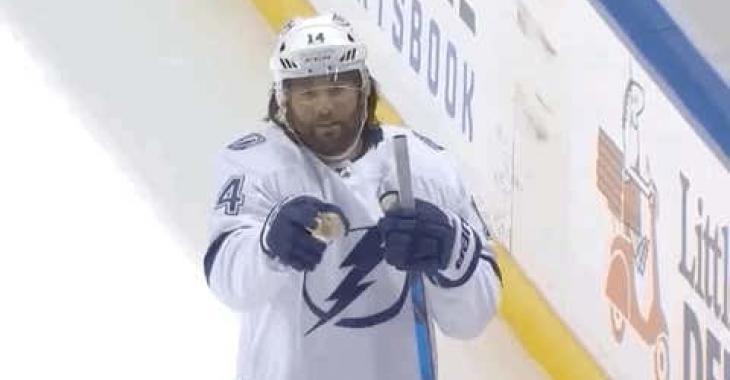 Pat Maroon knows how to get under his opponent’s skin. However, on Friday night in the pregame warmup ahead of Game at the Bell Centre, the Tampa Bay Lightning veteran forward was unable to provoke the Canadiens’ players.

He was seen by many pundits and reporters skating up and down the red line, just looking for some good conversation in the second half of the pregame warmup.

However, there were no takers.

Many insiders and reporters are expecting that a fight is most likely to erupt between Maroon and Anderson before the Stanley Cup is hoisted. During a segment on TSN690, Pierre McGuire explained how, at some point Josh Anderson and Pat Maroon will fight, and went on to say Maroon will get him to engage.

Maroon has already gotten under Josh Anderson’s skin in Games 1 and 2, but the Habs’ forward was under control and did not let the veteran pest get to him. But, with the pace Maroon is going after the fast forward, we could indeed see a fight in the coming days. The two players were caught chipping and chirping at one another during the first contest of the final, and we cannot imagine this ending this well.

Maroon is looking to win his third conservative Stanley Cup, he who hoisted the prestigious trophy last year with the Lightning, and back in 2019 before he signed in Tampa and was part of the championship crew of the St. Louis Blues.

And he is willing to do anything to get that Cup.

Rumour: Three-team trade needed to get Tarasenko out of St. Louis
Subscibe to
Our NEWSLETTER
Receive the best articles of the web directly in your email