NHL News : Pat Maroon admits that it was actually him who dented the Stanley Cup

You think after three in a row he'd be better at hanging onto the thing! 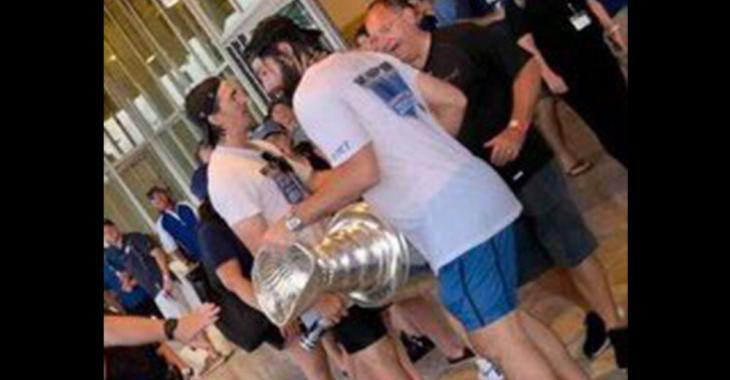 In case you missed it earlier this week, a photo surfaced on social media that appeared to show the Stanley Cup with a bit of an upper body injury, shall we say.

The Cup was whisked away from the champion Tampa Bay Lightning and ironically was taken back to Montreal for some repairs. Thankfully now though the chalice looks as good as ever.

Now the offending culprit has come forward and owned up to his mistake. The man who dented the Cup was none other than back to back to back champion Pat Maroon.

Maroon came clean during a radio interview with his hometown ESPN Sports Talk radio in St. Louis admitting that he slipped and fell while holding the Cup.

“It was obviously raining and it was wet,” Maroon said. “I went to lift it, and I went backwards with it. I slipped and (Cup keeper) Phil (Pritchard) helped me up and the Cup went back on it’s end."

“People are saying we disrespected the Cup, such BS because if they had half a brain, you know it’s wet outside and you’d think we’d be throwing the Cup around? No. We didn’t disrespect it. It was a complete accident, and we both got hurt. My back has been hurt all day. So, that’s what happened. Nothing crazy.”

Maroon said that Pritchard told him it was okay and not to worry about it.

“I’m sure there’s way worse things that have happened to the Cup besides me falling,” Maroon said. “They said it’s an easy fix. ... It’s (going to be) back in Tampa on Thursday, so a quick fix. It wasn’t even that bad. The picture made it look like it was dented that bad, it wasn’t.”

As for who took the photo, Maroon isn't quite sure who the culprit is but he and the boys are on the case.

Maroon says the incident took place at a private function with only friends and family in attendance so whoever sold them out is in the belly of the beast!