Subban with a cheap shot. 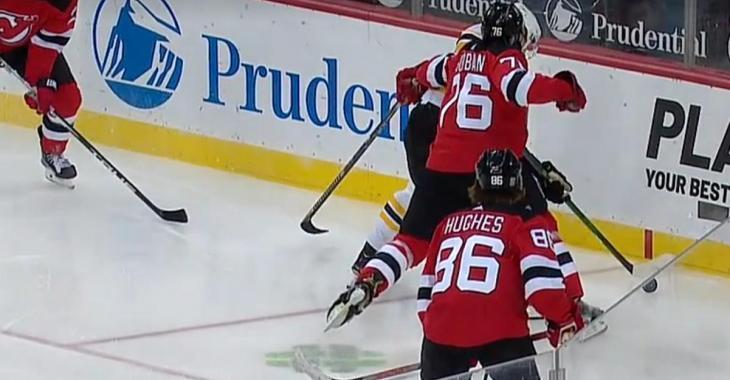 I may be reading a little too much into just a single game, but it seems to me as though Boston Bruins rookie Trent Frederic may have managed to worm his way into the head, or perhaps under the skin, of veteran New Jersey Devils defenseman P.K. Subban.

On Saturday afternoon the Bruins and the Devils faced off for the second time this season and after their previous matchup tensions were running high coming into this one. The Bruins were coming into this game looking for a measure of revenge on behalf of Bruins goaltender Tuukka Rask who had been the victim of several collisions in his net courtesy of Devils forward Miles Wood, a situation that was remedied by the fists of Bruins defenseman Kevan Miller in the opening seconds of the game.

Frederic and Subban had a number of back and forths during the game and could even be seen trash talking back and forth away from the play at one point, with the National Hockey League's officials eventually stepping in and separating the two men before it escalated to anything more than words.

If Frederic was trying to get under the skin of Subban it appears to have worked. Later in the game Subban took some pretty serious liberties with the rookie when he delivered what appears to have been a sucker punch to the shoulder or chest area of the unsuspecting Frederic. Now initially when I saw this I thought it was a push or shove of some kind, but after seeing the slow motion replay there's no mistaking that this is much more than just a push, and that Subban is winding up for a punch.

To make matters worse for Frederic, Subban finished off the blow by shoving the Bruins rookie off balance and down to the ice where he crashed hard onto his back. Honestly this ended up looking like a pretty dangerous play for Frederic, and thankfully he was able to skate away from this one under his own power after nearly smacking the back of his head on to the ice.

Subban was called for "holding" on the play and awarded a 2 minute minor but, given how many times these teams will face off and the way this rivalry seems to be blooming so early in the season, I expect that this won't be the end of it.

Charlie Coyle tallies in his return to the lineup (VIDEO)

Flashback: Henrik Lundqvist writes letter to younger self
Subscibe to
Our NEWSLETTER
Receive the best articles of the web directly in your email