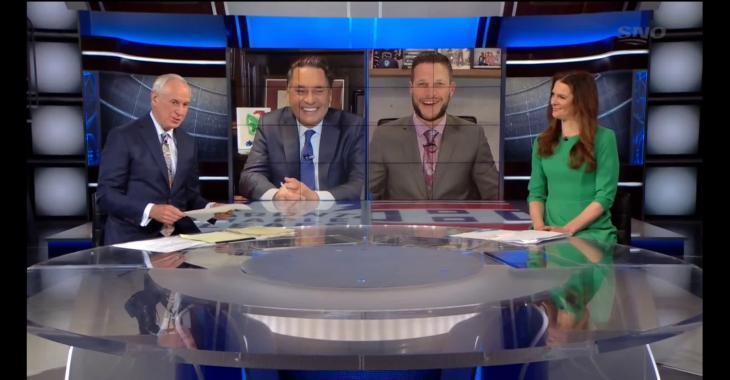 On Tuesday night, during the coverage of the 2021 NHL playoffs, Ron MacLean put himself in a dangerous position as he attempted to make a joke during Tuesday’s national broadcast of Game 4 between the Toronto Maple Leafs and Montreal Canadiens. A bad one. We cannot say what the hell he was thinking. His comment led to outrage on social media as it was perceived to be “homophobic” with different videos of the footage quickly going viral.

This is what happened: as analyst Kevin Bieksa was wrapping up a segment, MacLean said, “You have a photo of a man with his tarp off, you’re definitely positive for something.”

Bieksa often changes pictures on his shelf behind him as he analyzes the NHL playoffs. MacLean's comment was interpreted by many on social media as a joke suggesting that Bieksa is attracted to men and has AIDS.

After the comment, MacLean’s co-host Jennifer Botterill winced as he attempted to throw to commercial.

Here is the footage as MacLean puts more than his foot in his mouth:

Fans have since been demanding that Sportsnet fire MacLean, pointing out his inappropriate and offensive his seemingly odd attempt at humour was.

"With today being about the fight for racial equality in the NHL, Ron MacLean saw it fit to perpetuate homophobia on national TV instead. Incredibly disappointing but honestly not surprising," one Twitter user said.

We all remember that Don Cherry was fired more than a year ago for racist comments he made on the air. MacLean was mostly silent when his longtime broadcasting partner got the boot for saying that recent immigrants to Canada should honour those who fought for our freedom and way of life they came here to enjoy. Cherry later commented that he was disappointed in his friend's lack of support.

Now, fans are loudly claiming that MacLean should have been fired at the same time, and since it did not happened in November 2019, it should happen this time around with this unacceptable comment.

MacLean had yet to issue a statement at the time of this writing, and it remains to be seen how his employer, Rogers Sportsnet, will handle the situation. This is surely to be continued...

5 U.S. cities, including Kansas City, expected to reach out to the NHL to welcome Canadian teams for 2020-21
Subscibe to
Our NEWSLETTER
Receive the best articles of the web directly in your email