Some insiders appears to agree with our gut feeling… 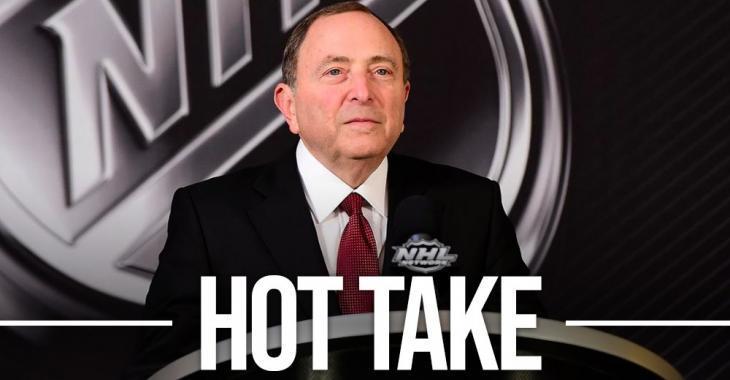 For the past week, the National Hockey League has maintained that it is focused on putting together a 56-game schedule, targeting January 13th as the start date for next season.

Despite progress being made, there remains a ton of work to be done before the puck can be dropped and we are starting to wonder if their projected start date is even possible at this point. So many more hurdles need to be cleared for hockey to return in just over a month and it sounds like players and the league still aren’t on the same page.

We get the feeling that the start date will - once again - get pushed back. Who are we to say such a thing? You’re right, we are hockey fans just like you, and maybe we’ve been hurt in the past. Remember on Draft day at the beginning of October when commissioner Gary Bettman himself announced that the projected start date was January 1st? Yeah, that didn’t happen…

Sure, a huge hurdle was cleared when the NHL opted to move ahead under the framework of the Collective Bargaining Agreement extension ratified by both sides in July. But so much more needs to get done : critical date calendars (trade deadline, playoff start and end dates, etc.), divisional realignment, testing and health protocols, roster and taxi squad limits, a potential player opt-out provision, schedule flexibility and how the NHL will navigate any interruptions due to COVID-19 outbreaks and local health authority or government restrictions.

Darren Dreger explained on last night’s Insider Trading on TSN how some league executives and players feel skeptical on the mid-January start date.

“You’re three weeks - a little more than three weeks outside of NHL training camp, early January, so everybody involved in the process are hopeful but they’re many who are also skeptical. I talk about club executives, general managers, player agents : they recognize the amount of work that has to get done and, oh yeah, there is still COVID-19, that all of the provinces, states and governments are wrestling with in terms of health authorities and the different levels of governments.

The National Hockey League assures that once they have an agreement, they can get it done, they can drop puck on January 13th, but there is so much to do and they’re many skeptics…”

We are all hopeful that an agreement can come between the players and the league, however, when Dreger’s colleague Pierre LeBrun talked about when it will be announced, there is a lot of doubt and confusion there too. Which isn’t helping our level of confidence in a January 13th start date…

“They hope to get it done in time on a vote for next week on their respective sides, explained LeBrun on Insider Trading.

“On the players’ side, I was told they were hoping to be done through the weekend and then they can get a vote on the executive board Monday or Tuesday if all goes well. Now I asked a governor who was on the call Wednesday with the NHL and all they heard on that call was ‘get ready for a vote sometimes perhaps next week’. I looked for a little more clarity there and I was told from a league source perhaps a board vote by the end of next week.

“Now listen, the Ottawa Senators are part of the forgotten seven, they get to start their camp three days before the 24 teams who played in the Return to Play last summer, that’s December 31st. You’re talking about players who need 14-day quarantine, that’s next Wednesday for the 14 days so… I think people want this as ratified as soon as possible next week.”

So, you see why we are skeptical… Maybe we should be honest and say that we are scared. 2020 has been rough on everybody and there is no doubt that the return of hockey would cheer up a lot of us. However, we bet we aren’t the only ones hoping for an official start date in order to get excited about the NHL’s return.

Get it set in stone!