A huge blow to the Blues. 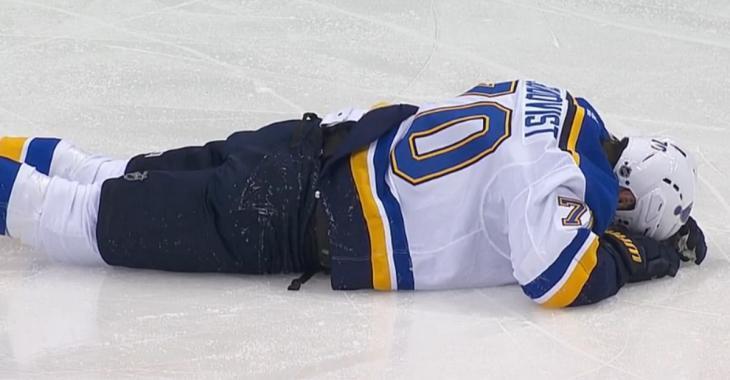 The St. Louis Blues have confirmed the worst.

The news is a devastating blow to a Blues team that is currently battling for a playoff spot in the National Hockey League's West division this season, but I suspect that fans will have already prepared themselves given just how bad this injury looked on Friday night.

What makes this injury a particularly difficult one to swallow for the Blues is that this appears to have been largely avoidable.  For those of you who missed it, the injury occurred during a match up between the Blues and the San Jose Sharks and took place relatively early on in the game during the first period. It was not a Sharks player that caused the injury however but instead it was teammate Kyle Clifford who took Sundqvist out with a knee to the back of the leg, causing the Blues forward to fall awkwardly and no doubt ripping his knee to shreds in the process.

As you can see in the replay below, Clifford was clearly trying to make a play on the puck and had no intention of injuring his own teammate. Despite that this is a very careless play and I suspect that the Blues aren't going to be thrilled about it.

At the time of the injury Sundqvist was entirely unable to leave the ice under his own power and had to be carried off by several members of the Blues, which was already a pretty good indication that things were not good. There has been no timetable established by the Blues for when they expect Sundqvist to recover, and it may simply be too early to tell at this point.

That being said a torn ACL is always an extremely long term injury and I would not be surprised if this is something that affects him even beyond this current season.

We wish Oskar a full and speedy recovery.

Goaltender Curtis McElhinney retires with pure class.
Subscibe to
Our NEWSLETTER
Receive the best articles of the web directly in your email