The premier of Ontario had to do the uncomfortable task of donning a Habs sweater. 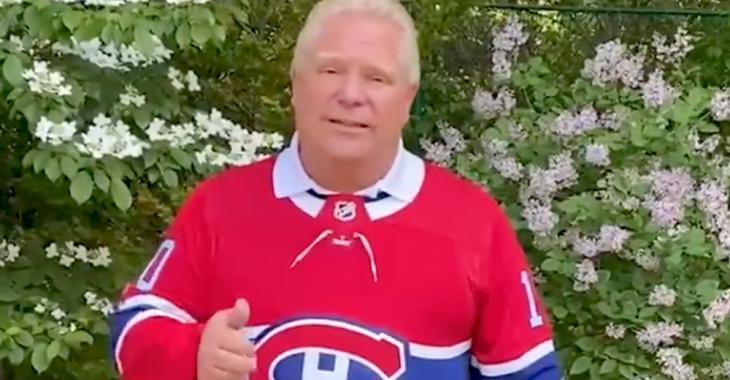 The history of the National Hockey League is a rich one, with traditions passed down from generation to generation - especially in Canada, where hockey rides high as the national pastime.

And you can certainly bet that the traditions include never doing the unthinkable and displaying the colors of a hated rival, such as the historic rivalry between the Original 6 franchises Toronto Maple Leafs and Montreal Canadiens.

But after the Canadiens did the unthinkable and overcame a 3-1 series deficit against the Leafs by winning Game 7 last night at Scotiabank Arena, one notable Toronto fan had to pay up.

Doug Ford, who serves as the premier of Ontario, lost a wager against François Legault, the prime minister of Quebec. The stakes? Having to wear the sweater of your rival. And thanks to Montreal's 3-1 triumph over the Leafs last night, Ford held up his end.

Wearing a Guy Lafleur Habs sweater, Ford recorded a video message in which he congratulated the Montreal fanbase, as well as thanking Legault for the gift of the apparel.

"As was promised to my friend Francois and all the Habs fans out there, congratulations," Ford began.

Of course, it wasn't long before he had to admit the truth - he didn't like having to wear his rival's colors.

"And, this is killing me putting this jersey on," he said. "But I'm proud of our great Leafs nation, they did a great job. All I want to see now are the Habs to win the Stanley Cup or one Canadian team win it. You guys did great."

Ford wasn't able to end the video without giving proper credit to goaltender Carey Price, who stonewalled the Leafs in Game 7 and throughout the series.

"And thank God, you got that Price, one of the best goalies in the world," Ford said. "And I gotta tell you, this is a shirt you gave me François signed by Guy Lafleur, what an icon he was, as much as I'm upset that the Leafs didn't win, I still love you François, you're the best."

The Canadiens will be taking on the only remaining Canadian team remaining in the Stanley Cup Playoffs, the Winnipeg Jets. Game 1 of their series will begin Wednesday night at 7:30 PM EST at Bell MTS Place in Winnipeg.