NHL News : Oilers rumoured to be taking a run at Maple Leafs’ Hyman

Edmonton won’t face Toronto in the second round, but might go after them elsewhere 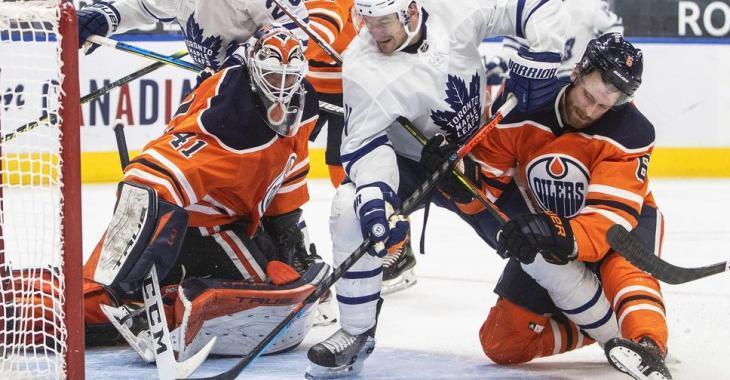 The Edmonton Oilers don’t get the chance to face the Toronto Maple Leafs in the second round of the postseason as they were ousted in just four games by the Winnipeg Jets, however, they might still find a way to get under their skin.

On Friday during his weekly 31 Thoughts podcast on Sportsnet, insider Elliotte Friedman revealed that he gets the sense that the Oilers could go after one of the Maple Leafs’ pending free agent.

“I wouldn’t be surprised if they take a run at someone like (Zach) Hyman.”

Hyman is on the final year of a four-year, $9 million deal he signed in 2017, one of the last contracts Lou Lamoriello signed before turning over the reigns of the Maple Leafs to current general manager Kyle Dubas.

While Hyman has mentioned in the past that he would love to stay in Toronto, it is pretty clear that he could get offers that will be in the $5M-6M range as opposed to the $4M-5M range the Leafs are more comfortable with. And that could be where the Oilers choose to hit.

We’re not saying the Leafs won’t fight for him : Hyman’s importance in the team’s lineup is unmeasurable. However, the Oilers’ GM Ken Holland, who hinted at a possible buyout this week, could have money in the bank and the necessary moves to get Hyman the money he wants and the desire to pursue his career in Edmonton.

Fans have already been vocal about the rumour stating that the Oilers need to stay away from Hyman, who played up and down the Maple Leafs lineup this season. This will be fun to see how Toronto deals with the threat of losing Hyman on the free agent market, or worse at the hands of the Oilers.