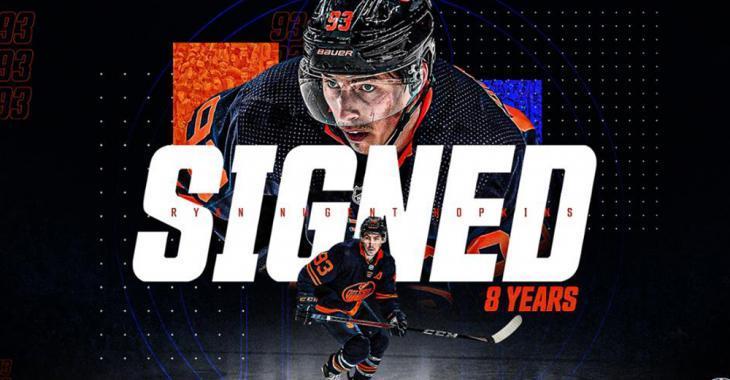 EDMONTON, AB - The Oilers have agreed to terms with forward Ryan Nugent-Hopkins on an eight-year contract extension with an average annual value of $5.125 million.

Nugent-Hopkins has scored 185 goals and 293 assists for 478 points in 656 career regular season games after getting selected first overall by Edmonton at the 2011 NHL Draft.

The 28-year-old is coming off his 10th NHL season that saw him score 16 goals and 19 assists for 35 points in 52 games. Nugent-Hopkins has also scored three goals and 11 assists for 14 points in 21 career playoff games, including one goal and one assist in four games against the Winnipeg Jets earlier this year.

The Burnaby, B.C., native was a finalist for the Calder Memorial Trophy in his rookie year, scoring 18 goals and 34 assists for 52 points in 62 games during the 2011-12 season.

Nugent-Hopkins' top offensive season to date came in 2018-19 when he tallied 28 goals and 41 assists for 69 points in 82 games, which were all career highs. He has 50 career power-play goals, 169 career power-play points, seven career shorthanded points and 24 career game-winning goals.

For our earlier report from NHL insiders Elliotte Friedman and Ryan Rishaug, read below:

According to a report from Sportsnet NHL insider Elliotte Friedman, pending free agent Ryan Nugent-Hopkins is set to sign an eight year, $40 million deal with a $5 million annual cap hit.

Under his new deal it appears that The Nuge will be an Oiler for life. His new deal will take him to age 36 and will give him 18 years with the franchise that selected him 1st overall back in 2011.