Good news for the Canucks' wallet, but... 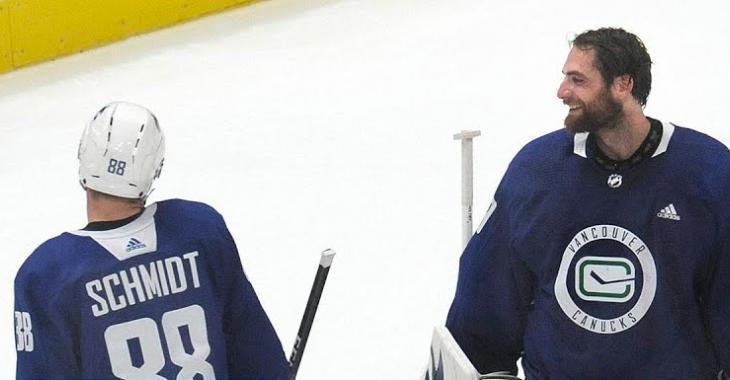 We heard earlier this season that the Vancouver Canucks were looking to move defenseman Nate Schmidt only to find out that it was the veteran blue liner who wanted out.

While Schmidt’s desire to be moved might be exactly what the Canucks want, they could find it hard to move him, as he didn’t live up to expectations. While he was very dependable on the Canucks’ blue line, Schmidt saw a significant drop in his defensive play as well as his offensive production, scoring just 15 points in 54 games played last season.

Now, it sounds like another player is asking out of Vancouver as Sportsnet’s Elliotte Friedman believes that the Canucks have given Braden Holtby’s representatives permission to speak with other teams about a possible trade.

It sounds like Holtby, who was among the players left exposed by the club for the Seattle Kraken’s expansion draft, is looking for a new start elsewhere.

But he had a tough season with the Canucks, finishing with a 7-11-3 record, a 3.67 goals-against average and a .889 save percentage. The Kraken was not interested…

And so Friedman reports that his agents could make a pitch to see if any other team is tempted to get him.

However, Holtby has a single year left on his deal which comes with a $4.3 million cap hit but the veteran goalie is still due $5.7 million in salary.

While he might not have impressed many in the past season, we need to remind ourselves that he won Vezina Trophy as the NHL’s top goaltender in 2016 and captured the Stanley Cup with the Washington Capitals in 2018.

The Canucks need to find a way to  offload money, especially with Elias Pettersson and Quinn Hughes are set to become restricted free agents and are up for new contracts and money will be needed in the Canucks’ bank.

While general manager Jim Benning did state that there  is “a lot of interest” in Schmidt from other teams, nothing was said about what Holtby is fetching on the trade market.

As of now, trade talks continue on Schmidt and Holtby and even Vancouver’s pick at No. 9 in the first round of the draft, which takes place tonight.

“We’re working to try to free up some cap space and make some moves and change our group because we want to take another step next year,” said Benning.

Alex Ovechkin launches his very own NFT collection.
Subscibe to
Our NEWSLETTER
Receive the best articles of the web directly in your email