NHL News : No. 1 NHL Draft selection Owen Power told the Sabres of his intentions in July

The Sabres were already aware of their top selection's plans to return to college this year. 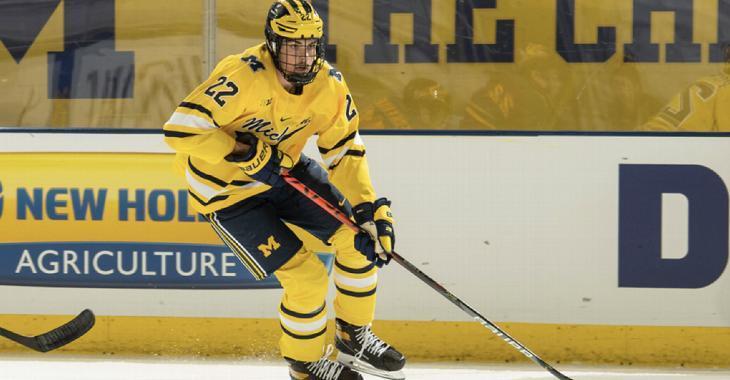 The Buffalo Sabres were rewarded for finishing last overall during the shortened 2020-21 NHL Season by winning the top overall draft selection in the Draft Lottery (Red Wings fans turn away).

And when it came their turn to announce their selection, they went with University of Michigan's Owen Power, a 6'6, 214 lb. defenseman who made the Big Ten All-Freshman Team and All-Big Ten second team selection as a freshman. He is also the 16th defenseman to be drafted first overall since 1970, and second since the Sabres selected Rasmus Dahlin in the 2018 Draft.

However, Sabres fans won't get a chance to see Power suit up in Buffalo - at least, not yet.

He officially made his plans known last week that he intends to return to Ann Arbor for his sophomore season rather than making the jump to the NHL. But though the news of his decision was only recently made public, Power informed the Sabres of his intentions last month.

One of the top teams in the collegiate ranks, the Wolverines have national title aspirations, and Power wants to be a part of it before turning his attention for the pursuit of the Stanley Cup.

"Going back another year, I can get a lot of development, being able to dominate games at the college level," Power said. "And then how good the team's going to be next year, we're going to have a really good chance at winning a national title."

Of course, Power isn't the first prospect to return to their college for a second year before making the leap to the professional ranks. In recent years, we've seen the likes of Cale Makar, Quinn Hughes, Zach Werenski and Charlie McAvoy do the same.

Power scored three goals along with 13 assists during his freshman season with the Wolverines, and also helped his native Canada win gold at the 2021 world hockey championship.