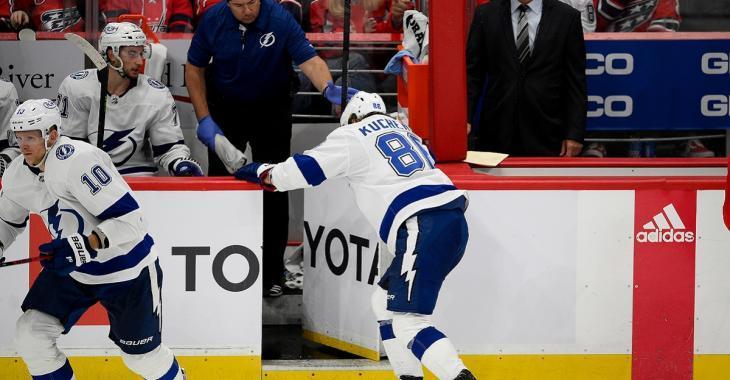 I think I already know what the reaction to this news is going to be.

Last season the Tampa Bay Lightning were at the center of controversy due to the fact that many felt they had found a way to circumvent the National Hockey League's salary cap. Thanks in large part to the fact that star forward Nikita Kucherov had suffered a major injury, one that required a long period of rehabilitation, the Lightning were able to max out their cap space in the regular season. That would in turn allow them to field a much deeper team than many of their opponents in the 2021 Stanley Cup Playoffs, leading to a great deal of criticism from angry fans.

Now that we've gotten that little bit of context out of the way, we now have yet another injury to Nikita Kucherov to report. There's still no official word on the severity of the injury at this time, but we do have an update from Lightning insider Erik Erlendsson who had some bad news to share on Monday morning. According to Erlendsson the initial word on Kucherov is "not positive" with him adding that there may be a need for surgery here as well.

That isn't enough to go on to set a definitive timeframe for Kucherov's return from injury, but it certainly makes it sounds like this will be another long term absence for the talented Russian superstar.

The way Kucherov suffered the injury was also a sign that this could be something bad. Kucherov appeared to come up favoring his groin after what appeared to be very minor contact on the ice, and it is often these types of injuries that lead to longer absences from players in the National Hockey League.

As you will see from the replay, Kucherov is barely touched on the play and certainly not in a manner that would lead to you to believe it had caused an injury. The replay also does a very good job of highlighting why many have been speculating that this is an injury to Kucherov's groin, as again the forward appeared to be heavily favoring that area immediately following the contact.

Stay tuned for updates on this one.

Subban admits he has failed as a leader...
Subscibe to
Our NEWSLETTER
Receive the best articles of the web directly in your email