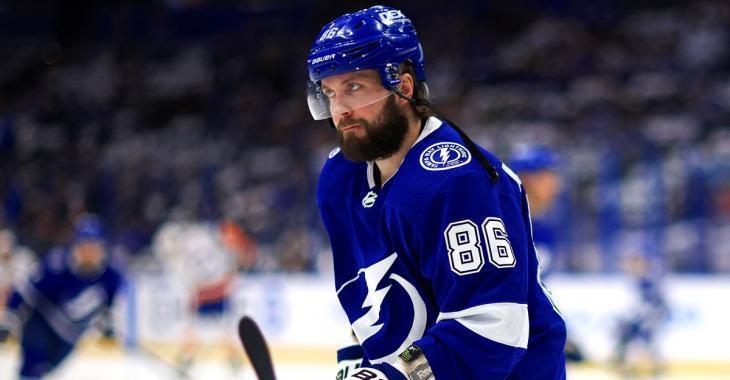 The Tampa Bay Lightning may have once again lost the services of their star player.

On Saturday night Lightning star forward Nikita Kucherov was forced out of the game early when he appeared to suffer some type of injury. The injury occurred during a game contested between the Lightning and the Washington Capitals, but at this time the details regarding the nature of that injury have been very sparse.

Lightning insider Erik Erlendsson has speculated that the sequence that led up to the injury made it appear like some type of sports hernia or a groin issue to him, but that is purely speculative at this time.

Interestingly enough the messaging from the Lightning on this one has been drastically different depending on who you talk to. If you're looking for some good news, head coach John Cooper appeared to downplay the severity of the injury when he cautioned everyone not to hit the panic button too early.

Fellow Lightning teammate Steven Stamkos seemed to have a far less optimistic view of things however when sharing his thoughts on the injury to Kucherov. Stamkos pointed out that Kucherov is generally a pretty tough guy and as a result of that he felt the injury "didn't look good" given that Kucherov appeared to be in considerable discomfort.

It becomes even more difficult to predict the nature of this injury when you realize how it happened. Kucherov appeared to be looking to deliver a hit on Capitals forward Garnet Hathaway, who admittedly had been a pretty physical presence in the game up until that point, but he largely failed to connect with his attempt at the body check. Instead it was Kucherov who came away from the failed hit with the injury, although again it is unclear at what point during the interaction that Kucherov suffered it.

The reaction to the news has been somewhat comical with many angry fans already accusing the Lightning of employing a similar tactic to the one they used last season. In that instance the Lightning used an injury to Kucherov to maximize their cap space, giving them what many perceived to be a competitive advantage when Kucherov returned for the playoffs. I can assure you that the Lightning aren't at all happy that their best player is looking like he could once again be sidelined for an extended period of time.