NHL News : Nick Foligno explains ’debilitating’ injury that forced him out of Toronto

​But the new Bruin still has great things to say about the Leafs! 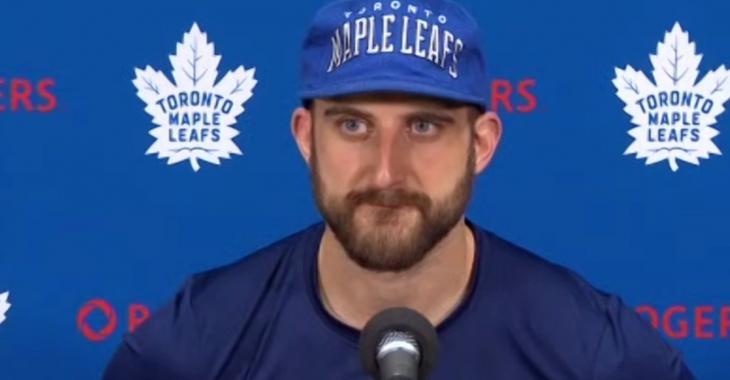 On the first day of free agency, the Boston Bruins signed Nick Foligno to a two-year, $7.6  million contract. It confirmed how the Toronto Maple Leafs weren’t planning to bring him back and on Thursday, the veteran forward explained why that is.

While the 33-year-old brought experience and versatility to the Maple Leafs, he couldn’t help them to make it past the first round of the playoffs against the Montreal Canadiens.

“My biggest disappointment is we didn’t get the job done and I unfortunately got hurt,” Foligno told Good Show.

Yep. A back injury he sustained in early May significantly impacted his ability to perform and prove he could finish his career in Toronto.

“I was just dealing with a really bad back injury that was debilitating,” Foligno said. “There was nerve pain. Shut down my whole right leg. It was really disappointing that happened at the time it happened. Anything else you can play through a lot of times. This I couldn’t. I tried and I just couldn’t be the player — I like to hit and forecheck and do the things necessary in order to win the hard minutes of the game. So when that kind of got taken away now I had to rely more on my positional play and trying not to hurt the team, instead of trying to help the team it felt like. That bothered me a lot as a player just because I knew I could give more, I just physically couldn’t.”

He ended up collecting just one assist, and one fight, in four playoff games. Despite his short stint with Toronto, who acquired him in a three-way trade at the deadline, Foligno was hoping to return to the club he loved so much.

It wasn’t in the cards…

“Regardless of what Leafs fans think of me, I’m way harder on myself, so the fact I couldn’t perform to the abilities that I felt I was early on killed me inside and it’s something I will regret forever probably that I couldn’t come there and be the player I expected to be.

“I loved every minute of my time in Toronto and I think that’s the bittersweet part.”

He never expected to get a deal with one the Leafs’ bitter rivals, the Bruins. He was considering going back to the Columbus Blue Jackets or even joining his brother Marcus in Minnesota. Foligno explained the decision to leave Toronto for Boston, hinting at a combination of factors including contract term, dollars and team fit, getting him to accept the deal from the Bruins.

While he wears the Black and Yellow now, he still has great things to say about the Leafs. For now.

“I have nothing but great things to say about that time. That’s why it stung so much,” Foligno said. “I’m sure the fanbase feels it just like we do. That’s a group that really felt like they were ready — we were ready — to take another step. We didn’t get it done and that’s on us and now they’re looking to make amends on that. It’s a really good group of guys and a team I feel privileged to have played with.”