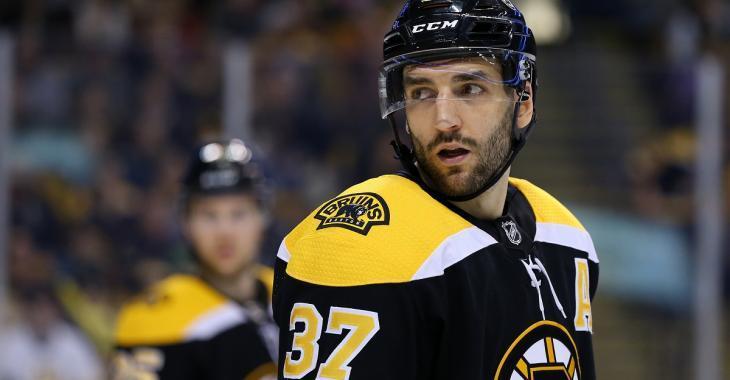 The National Hockey League has revealed the 3 finalists for the Frank Selke Trophy or sometimes otherwise simply known as the annual Patrice Bergeron award.

The Selke is an award that is handed out in each and every NHL season and it is given to the forward that demonstrates the most skill in the defensive component of the game. I'm merely joking when I say that it is referred to as the annual Patrice Bergeron award, however the Boston Bruins' captain has so thoroughly dominated this category in recent years that I could genuinely see the award being renamed in his honor after he has retired from the NHL as a player.

Unsurprisingly Bergeron has once again made the list of finalists, finishing the season with a plus minus rating of +27 on the season to go along with his 23 goals and 25 assists for 48 points in 54 games. Those numbers are even more impressive when you consider the fact that Bergeron spends significant time on the penalty kill for the Bruins alongside linemate Brad Marchand, in what has become one of the more effective penalty killing forward duos in the entire league.

Also making the list this year is Las Vegas Golden Knights captain Mark Stone. Stone has been an incredible force ever since signing his long term deal with the Golden Knights following a trade out of Ottawa, and this season was no exception. He finished the regular season with a plus minus rating of +26 to go along with his 21 goals and 40 assists for 61 points over 55 games played. What sets Stone apart from the competition however is the fact that he has arguably the best stick in the league with a seemingly uncanny ability to strip the puck from opposing players, a perfect tool for a player who also has an incredible set of hands.

Last but not least we have Florida Panthers captain Aleksander Barkov. Barkov ended the season with a plus minus rating of +14 to go alongside his 26 goals and 32 assists for 58 points over 52 games. The main advantage that Barkov would boast over the other two candidates here is the massive role he plays for his team with a staggering 20:56 of ice time per game on average over the course of the regular season. That's good enough for ninth among all forwards in the National Hockey League.

New favorite emerges in latest Stanley Cup odds.
Subscibe to
Our NEWSLETTER
Receive the best articles of the web directly in your email