NHL News : NHL under heavy fire after most controversial call of the season yet

This doesn’t make any sense… 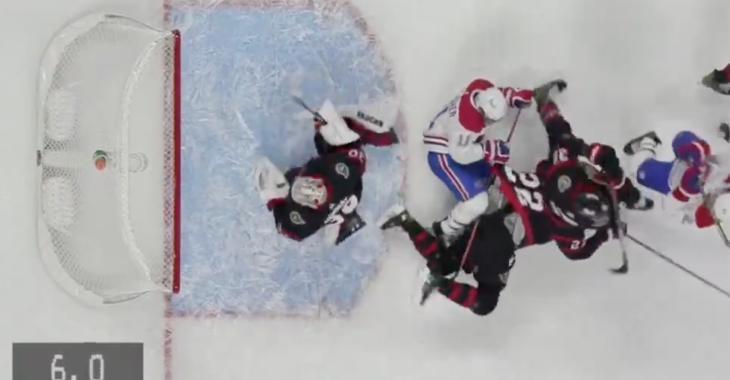 We all thought Montreal Canadiens’ Brendan Gallagher had scored the game-winner with 2.1 seconds left in regulation against the Ottawa Senators on Tuesday night.

But the National Hockey League told all of us how wrong we were!

The goal was waved off after a review found Senators’ goalie Matt Murray didn’t have time to reset after contact was made in the crease.

It does not make any sense. As you can see if the video below, the goalie interference remains a mystery. If Gallagher had time to reset, you have to wonder why it was determined that Murray didn’t.

It was reportedly the NHL’s Situation Room that initiated the challenge and this is how they explained their controversial decision:

“The decision was made in accordance with Rule 69.1 which states, in part, that “Goals should be disallowed only if: (1) an attacking player, either by his positioning or by contact, impairs the goalkeeper’s ability to move freely within his crease or defend his goal.“

The Situation Room has the right in the final minute of play in the third period and at any point in overtime (regular season and playoffs) to initiate the review of any scenario that would otherwise be subject to a Coach’s Challenge.

Gallagher was livid after the game, so close to getting a fine for his comments on the league’s decision, demanding more consistency in their goalie interference calls.

“To me, it’s ruined the product.” Gallagher said.

Fans have been outraged by the decision as well - even if they don’t root for the Canadiens - saying it is the most controversial call of the 2021 season yet.

To make things even more intense for the Habs, their head coach Claude Julien and assistant coach Kirk Muller were fired on Wednesday morning, following last night's loss at the hands of the Senators.

Sabres without coaches for tonight’s game!