This is NOT going to go over well with Rangers fans! 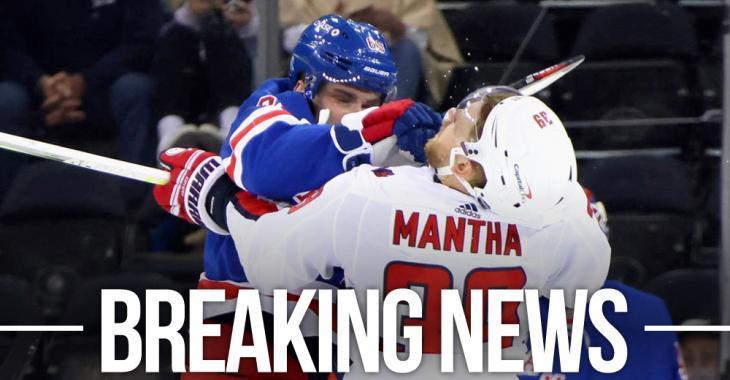 This just in, NHL Player Safety has suspended New York Rangers forward Pavel Buchnevich for one game for his cross check to the face of Washington Capitals forward Anthony Mantha.

The irony of this ruling is just... it's just too much to even believe, to be honest.

Buchnevich, of course, was rag dolled by Capitals forward Tom Wilson on Monday and had his head driven into the ice. For that infraction Wilson received the paltry discipline of a $5,000 fine. Flash forward one game later and Buchnevich gets suspended himself for an ugly, ugly cross check. Again... the irony would be completely unbelievable if I hadn't see this all play out myself.

For those who didn't see what transpired on Monday, check it out:

That's some WWE nonsense that has no place in hockey. In my opinion Wilson should have sat out a game, maybe even two, for that infraction. Instead he got a slap on the wrist and all Hell broke loose between the Rangers and Capitals at MSG last evening. Buchnevich's infraction aside, there were more than half a dozen fights and 100s of minutes in penalties handed out. It was an absolute gong show that harkened back to the NHL's halcyon goon days of the 1970s. Depending on your opinion this is either a good thing or a bad thing.

Still... between this, the $250k fine against the team for criticizing head of NHL Player Safety George Parros, the absolute gutting of the team's front office, it's hard not to think that Wilson absolutely destroyed the entire Rangers psyche this week. I'm not going to use the term "rent free" like a lot of obnoxious Caps fans like use, but man oh man does Wilson have the Rangers' number.