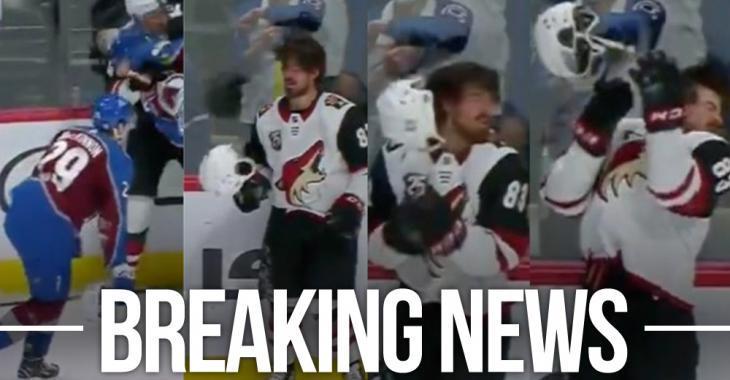 In case you missed it last night, Nathan MacKinnon absolutely lost his mind...

The Colorado Avalanche superstar earned himself a game misconduct after throwing a helmet at Arizona Coyotes forward Connor Garland. MacKinnon got absolutely trucked by Garland earlier on the play and evidently didn't like it because he absolutely snapped! MacKinnon wrestled Garland's helmet off his head and then threw it back in his face.

That bit of nonsense earned MacKinnon a 10 minute game misconduct penalty and got him kicked out of the game.

Now, MacKinnon has earned himself a tidy $5,000 fine from NHL Player Safety.

Between this and Connor McDavid's wicked elbowing penalty from earlier this week, what is going on with NHL superstars? Maybe McDavid and MacKinnon need someone like Dave Semenko or Marty McSorely out there to insulate these guys a bit more? Paging Zack Kassian and Nazem Kadri... time to step up boys.

Jarry mysteriously leaves games vs Isles, despite pitching a shutout

Dominique Ducharme hints at his lineup for Game 3.
Subscibe to
Our NEWSLETTER
Receive the best articles of the web directly in your email