Larsson will sit out the next few games. 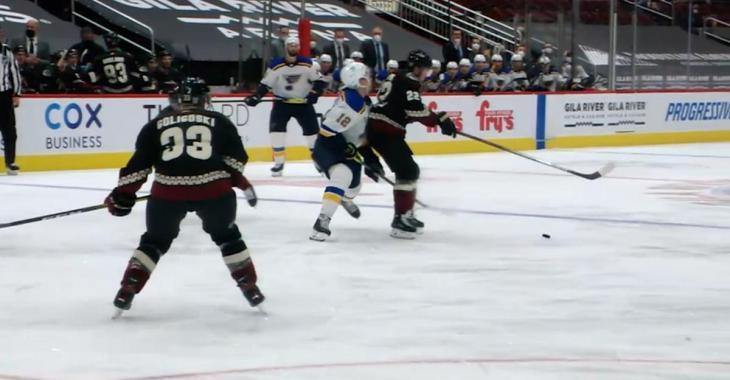 According to an official announcement from the league, the 28 year old has been suspended 2 games after a hit he delivered to St. Louis Blues forward Zach Sanford. The hit, which was clearly an illegal check to the head, was penalized at the time of the infraction but the league felt that additional discipline was warranted in this case for several reasons.

The first and most obvious was that Sanford's head was the primary, and arguably the only, point of contact on the hit. Larsson looked like he was going to miss Sanford entirely for a moment but turned back at the last second to make sure he delivered the hit. It was that decision that led to Larsson making contact with Sanford's head, and it was this that likely also resulted in the penalty being so harsh.

The second factor cited by the league was that the hit was entirely avoidable. As I mentioned Larsson had to adjust during the play in order to hit Sanford at all, something that the league was quick to point out should have instead been used as an opportunity to bail out on the play. Larsson did not bail out and instead chose to deliver the hit, unfairly putting Sanford's health at risk in the process.

There was one factor playing into Larsson's favor here and that was the fact that he is not a repeat offender. Nonetheless the fact that his first infraction of this kind resulted in a multi-game suspension should indicate just how bad the NHL and the Department of Player Safety believed this hit to be, and I can hardly disagree with that assessment. This could very well serve as a textbook example of what the NHL is trying to remove from the game, and likely it will in the future.

I would add that I do believe Larsson should be given the benefit of the doubt here. He has over 400 NHL games under his belt and has avoided these kinds of plays throughout his NHL career. This may merely have been a case of bad timing gone terribly wrong.