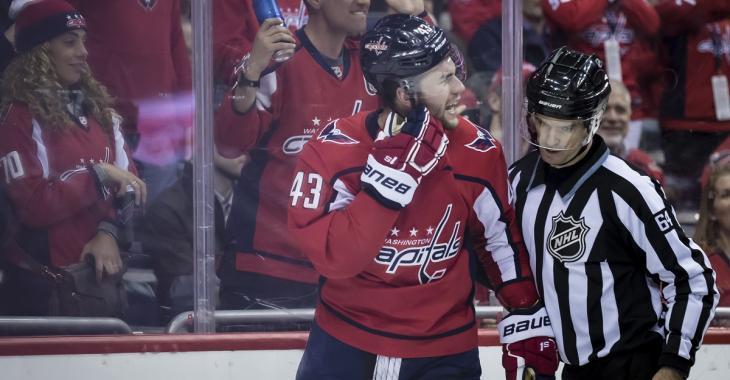 The National Hockey League's Department of Player Safety has just made a major announcement, one that would suggest they are getting ready to throw the book at Washington Capitals' defenseman Tom Wilson.

First, let's get to the announcement itself. On Saturday morning, via the NHL Player Safety social media accounts, the league announced that they had offered Wilson an in person hearing following his hit on Boston Bruins forward Brandon Carlo. An in person hearing is usually reserved for situations in which the league intends to suspend a player for 6 games or more, primarily because the NHL is required, under the rules of the collective bargaining agreement, to offer a player the in person option when looking to suspend him for a period of more than 6 games.

This is of course very bad news for Wilson and the Capitals and I suspect that we may be headed for a big battle over the length of this suspension due to some key factors surrounding this hit. Let's take a look at the factors that are going to count against Wilson:

There's no getting around the fact that this hit just looks awful. Carlo's head is crushed between the impact of Wilson's body and the protective glass surrounding the boards. Wilson gets his hands up right into the head of Carlo as well which also looks terrible. Add to that the fact that Carlo clutches at his head before collapsing to the ice and this is an optics nightmare for the NHL who is trying to get away from blows to the head.

We don't know yet just how bad the situation is going to be for Brandon Carlo, but we do know that it isn't good. It was widely reported on Friday night that Carlo had been taken to the hospital via an ambulance following the hit and there's no doubt the league will be taking that into account when determining the length of Wilson's suspension.

Wilson has been suspended multiple times by the National Hockey League and has injured his fair share of players during his time in the league. This has earned him a reputation as a dirty player so whenever he's involved in a situation like this one, all of the fans that have grown to hate him tend to call for blood. The backlash on social media on Friday night was massive, and there's no question in my mind that his reputation played a huge role in that and there's no doubt that the NHL noticed that backlash.

I did however indicate that there's going to be a fight over the length of this suspension, and that's because there are a number of factors that also play into Wilson's favor here. NHL insider Frank Seravalli has made the case that the hit was not illegal at all, pointing out first that Wilson's hit initially made contact with Carlo's torso and shoulder prior to connecting with his head.

Seravalli then goes on to argue that the hit does not amount to a charge, again indicating his belief that the hit is not a violation of the league's current rules.

Another hugely important factor that Seravalli brings up is that Wilson can not be considered a repeat offender, this despite his lengthy history of suspensions, due to how long it has been since he was last disciplined by the league.

Upon hearing of the league's decision to offer Wilson an in person hearing, Seravalli suggested that what the NHL was doing here could be unprecedented.

These are all factors that Wilson, the Capitals and the National Hockey League Players Association will be bringing up during his in person hearing, which could make this one of the most fascinating hearings we have had in years.

Stay tuned as we will be bringing you all the coverage of this happening.

Hurricanes pull off their second trade of the day.
Subscibe to
Our NEWSLETTER
Receive the best articles of the web directly in your email