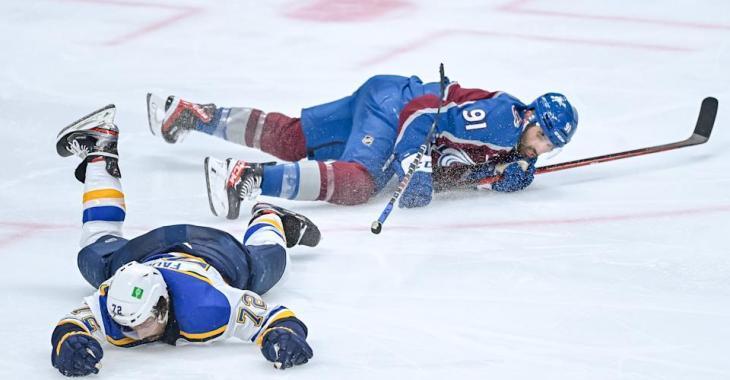 Nazem Kadri seems to lose it in the postseason. On Friday, the Colorado Avalanche forward was suspended eight (8) games for an illegal check to the head of St. Louis Blues defenseman Justin Faulk. The announcement was made as Game 3 between the Avs and Blues was taken place.

Kadri had an in-person hearing via Zoom Friday afternoon, which meant he was eligible to receive a suspension of five games or longer as per the collective bargaining agreement.

The illegal check took place in the third period of Colorado’s 6-3 win in Game 2 on Wednesday night as Kadri delivered the high hit  while Faulk attempted a shot. The blue liner, who remained down after the hit, did not finish the game. Kadri was ejected from the contest once the play was reviewed and he has given a major penalty for his questionable play.

This is Kadri’s third suspension in the first round of the playoffs in four years. He earns his longest suspension yet!

In the postseason last summer in the Edmonton bubble, Kadri managed to stay out of trouble, but we all remember his previous suspensions as a member of the Toronto Maple Leafs. He was suspended three games after a high hit on Boston Bruins forward Tommy Wingels in 2018, and then a year later, was suspended for the remainder of the opening round for a cross-check to the head of Bruins forward Jake DeBrusk in Game 2. The Leafs would go on to lose both series against the Bruins. Toronto traded Kadri to Colorado the following summer.

Kadri has been suspended an additional three times during the regular season in his 12-year career. He is known as a repeat offender, which played a part in today’s decision. He has now been suspended six times by the NHL, totalling 16 playoff games and 11 regular-season games.

And this one is likely to hurt the Avalanche, who is leading the series 2-0 against the St. Louis Blues - for now.

Bruce Cassidy makes several changes to the Bruins lineup.
Subscibe to
Our NEWSLETTER
Receive the best articles of the web directly in your email