Who's your pick? Gotta be Fleury, right? 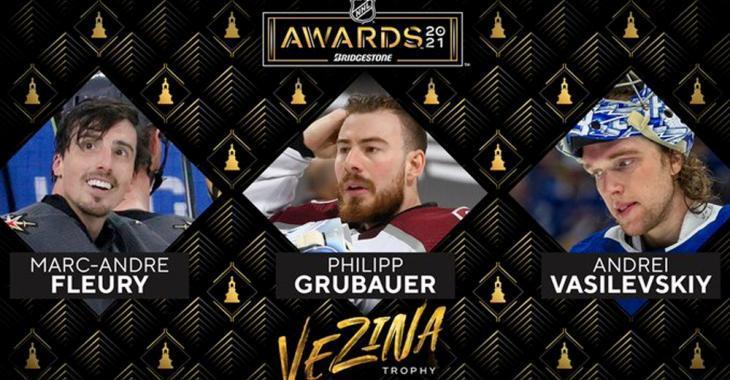 The NHL has officially announced its three finalists for the Vezina Trophy as the league's top goaltender in 2021.

From the official press release:

Fleury was 26-10-0 for the Vegas Golden Knights, finished third in the NHL in wins and shutouts (six), and was third in goals-against average (1.98) and save percentage (.928) among goalies to play at least 20 games. He started the season 5-0-0 and ended with wins in each of his final nine starts. Fleury helped Vegas (40-14-2) finish second in the Honda West Division and qualify for the Stanley Cup Playoffs for the fourth straight season.

Fleury allowed two goals or fewer in 25 of 36 starts and with Robin Lehner helped Vegas win the Jennings Trophy for allowing the fewest goals during the regular season (124). A first-time Vezina finalist, Fleury ranks third in NHL history with 492 wins behind Patrick Roy (551) and Martin Brodeur (691). He would be the first Golden Knights goalie to win the award.

Grubauer was 30-9-1 in 40 games (39 starts) for the Colorado Avalanche to finish second in wins (30), one behind Vasilevskiy, and tied Semyon Varlamov of the New York Islanders for the NHL lead with seven shutouts. He was second in GAA (1.95) and eighth in save percentage (.922).

Grubauer allowed two goals or fewer in 28 of his appearances, did not lose back-to-back games in regulation and helped Colorado (39-13-4) finish first in the West and win the Presidents' Trophy for having the best record in the NHL. A first-time finalist, he would be the first Avalanche goalie to win the award.

Vasilevskiy was 31-10-1 for the Tampa Bay Lightning and led the NHL in wins for the fourth straight season. He ranked eighth in GAA (2.21), sixth in save percentage (.925) and fourth in shutouts (five). He allowed two goals or fewer in 24 of 42 games and set a Lightning record with a shutout streak of 228:09, including three straight shutouts from Feb. 24-March 2.

Fleury wins this in a walk, right? Anyone else robbed? Connor Hellebuyck?