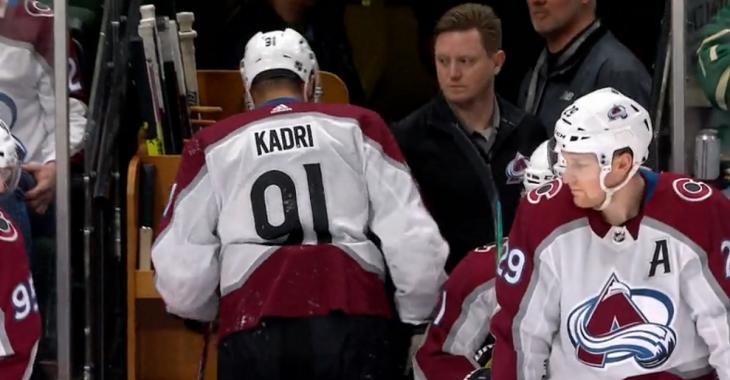 The Colorado Avalanche suffered a disappointing second round exit in the Stanley Cup Playoffs and although they can and should be proud of the effort they put forward this season, the reality is that the expectations coming into these playoffs were at an all time high.

There will be plenty of things to point the finger at in the offseason when the Avalanche reflect back on what went wrong in the playoffs and more specifically what went wrong against a tough Las Vegas Golden Knights squad that ousted them in 6 games, but many have already made up their mind about who to blame. One of the targets of that blame has been veteran forward Nazem Kadri, and perhaps for good reason, after he put his team at a major deficit when he earned himself a massive 8 game suspension in the first round of the Stanley Cup Playoffs.

As a result of his suspension Kadri was a non factor in the second round against the Golden Knights, badly hurting his team's depth up the middle purely due to the cost of his selfish and irresponsible behavior. There's no doubt in my mind that Kadri does deserve to shoulder a significant portion of the blame here, but the abuse that he has been subjected to as a result of his frankly idiotic decision making in the playoffs has now gone too far.

On Friday an account belonging to "Jazzy Kadri", the Kadri family cat, published a series of messages that have been directed at Nazem since the Avalanche were eliminated from contention. Now to be clear I'm not sure who runs the Jazzy Kadri account, I would suspect his wife, but given that it features numerous photos of the family cat someone with very close ties to Nazem and his family makes the most sense.

Warning, the language contained in the screenshots of the messages is disturbing:

Now as I've already said I do understand the anger that fans in Colorado would have for Kadri, something fans in Toronto are all too familiar with, but there are ways to express that anger without disparaging the man's race or religious beliefs. This kind of abuse only serves to make hockey fans look bad and frankly will end up garnering more sympathy for the man you're trying to criticize than anything else.

Thankfully the people delivering these messages have been outed and hopefully all of you reading this know better than to engage in this type of hateful behavior.

Blue Jackets pull the impossible to get Laine on ice ASAP!
Subscibe to
Our NEWSLETTER
Receive the best articles of the web directly in your email