Despite his suspension being upheld, Kadri focuses on what matters most. 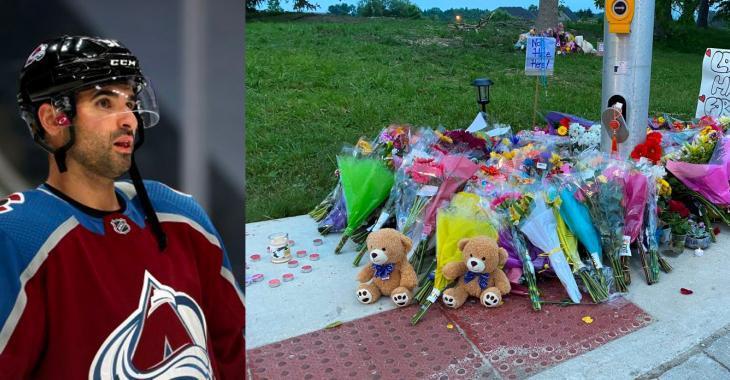 It’s good thing there are hockey news to lighten up what’s happening in the world. On Sunday, a family of five was waiting at an intersection in the Canadian city of London when a driver intentionally mounted the curb and struck them, killing four, because of their Islamic faith, officials said.

“There is evidence that this was a planned, premeditated act, motivated by hate. It is believed that these victims were targeted because they were Muslim,” said Detective Superintendent Paul Waight of the London Police. “There is no known previous connection between the suspect and the victims.”

A statement released to the media by a family spokesperson names the deceased as Salman Afzaal, his wife Madiha, their daughter Yumna and Salman’s mother. Fayez Afzaal, 9, survived the attack. He “is on the road to recovery from serious injuries,” the statement reads.

On Tuesday, moments after Nazem Kadri’s eight-game suspension has been upheld by an independent arbitrator, the Colorado Avalanche forward shared a powerful statement on what took place in his community of London.

“Heartbreaking watching my community of London being terrorized by such a senseless, cowardly act. We will continue to conquer racism together. My thoughts and prayers are with the victims and their families. May love always be stronger than hate.”

We can only agree with Kadri. While he can be a trouble-maker on the ice, he remains a human being with a good heart and priorities in the right place. He made the statement hours after his eight-game suspension has been upheld by an independent arbitrator. He received the eight-game ban for a hit to the head of Blues defenseman Justin Faulk in Game 2 of the first-round series between Colorado and St. Louis. Faulk was forced to leave the contest and was sidelined the rest of the series due to an upper-body injury. The Avalanche defeated the Blues in four games to advance to Round 2.

Our thoughts go out to the family and friends of Salman Afzaal, his wife Madiha, their daughter Yumna and Salman’s mother. We wish all the best and a quick recovery to the young boy whose life is forever changed by this hate.

If you would like to help set up on behalf of the family.