“People see a Russian translation and think it is the Bible, I guess.” 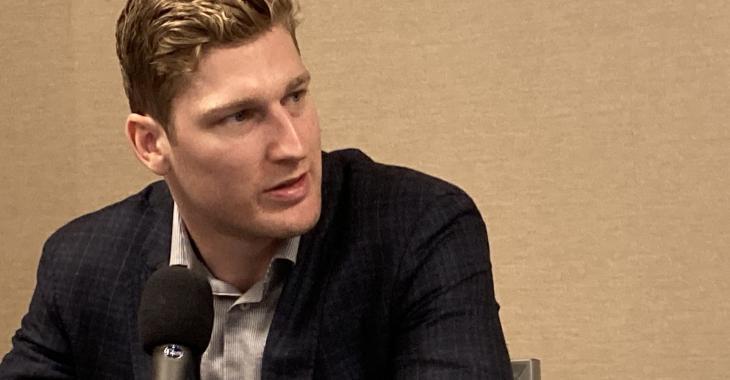 Back in August, Nikita Zadorov’s interview in Russia went vira when he started dishing out on his former teammate Nathan MacKinnon of the Colorado Avalanche.

As he spoke about MacKinnon, Zadorov ended up sharing private details and interesting information on what the top forward does to make sure he can always compete at an elite level. We are talking about monetary investments that hit 6-digits spent on chefs, doctors and dietologists. He makes sure he is surrounded by a team of experts to go through the season and has made significant changes to his lifestyle to improve during his career.

Zadorov explained how MacKinnon never drinks alcohol and only has water, and how he got rid of treats in the dressing room two years ago and influenced guys to eat better during the season, telling them they have all summer to eat junk food.

It didn’t take long for fans to make fun of MacKinnon and calling him out for his behaviour with teammates and being a health nut.

On Thursday during the NHL media tour, MacKinnon responded to the allegations that he is an insane diet freak with this statement:

“Yeah, it got a little out of hand I think,” MacKinnon said, per The Athletic. “Big Z. If you guys all know Z, he’s a bit of a donkey. People see a Russian translation and think it is the Bible, I guess. I don’t know. It’s all good. He went a little extreme. That’s what Z does. He loves a good quote.”

“I’m a regular guy. I’m not crazy,” he said, adding that he’s not always a health nut and sometimes goes to In-N-Out after games.

Of course, fans reacted to this as well with funny comments on social media. But you can tell MacKinnon wanted to make things clear about his very much talked about diet. But he did love all of the memes and jokes that were made by his teammates.

And a few days after Zadorov’s interview, former teammate Tyson Barrie posted a photo of himself on Instagram with some ice cream in hand while walking away from an ice cream truck. This led to Zadorov replying with “@MacKinnon29 is pissed.”

MacKinnon found it funny, but still want to clear things up.

“Some of the memes were pretty funny, actually,” MacKinnon said. “I saw some of them. I eat healthy, but people are crazy. I’m not like that.”

Golden Knights evicted from their hotel on Friday.
Subscibe to
Our NEWSLETTER
Receive the best articles of the web directly in your email