NHL News : MUST SEE: Landeskog loses it, fights off linesmen to get to Hartman!

Get out of the way, the Avs captain is pissed! 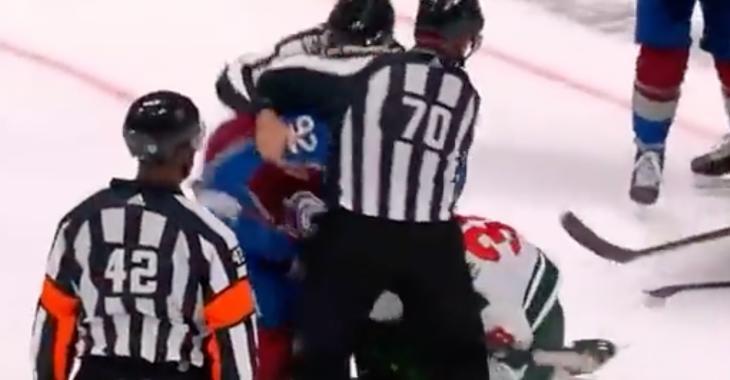 The Colorado Avalanche might have beaten the Minnesota Wild 6-4 on Thursday night in a preseason game, but we cannot say the same for captain Gabriel Landeskog and the player he went after, Ryan Hartman.

In the second period of a heated contest, Landeskog got set off by Hartman. Insiders and pundits on scene at the game believe the captain did not like the hit of Hartman on teammate Nazem Kadri and wanted to make him pay. But you have to imagine Hartman said something that truly got under Landeskog’s skin to make him react like this.

Even once the officials got them separated and sent to the penalty box, Landeskog still mouthed off to the referees about not being able to fight Hartman. The Avs superstar was handed a roughing penalty and a misconduct.

The Wild forward had to go down the tunnel for repairs with a bloody nose.

The game was a heated one as the Wild thought it had tie the game up in the final moments with Hartman playing the hero, but the referees waived if off immediately because he played the puck with a high stick.

I guess we can call this karma…

If things are this heated in the preseason, we can only imagine how intense the play will be in the 2021-22 season.

More NHL games postponed due to latest outbreak!
Subscibe to
Our NEWSLETTER
Receive the best articles of the web directly in your email