A tough blow for the Oilers : Ken Holland might now go after a former player! 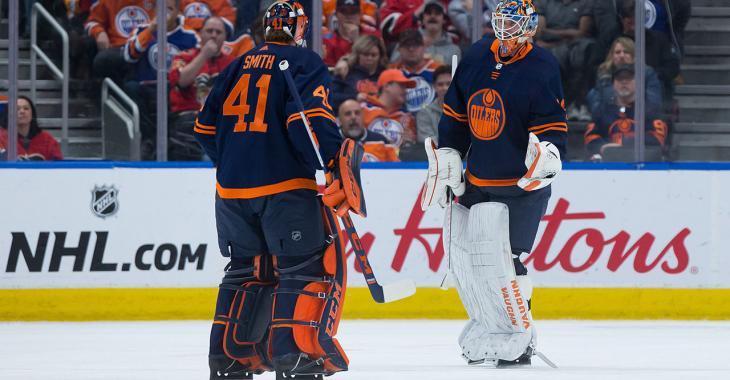 It has been reported in Edmonton that Oilers goalie Mike Smith could miss several weeks of action and has been placed on the long-term injury reserve. The Oilers re-assigned Olivier Rodrigue, playing in the Austrian National League, to the club’s taxi squad, pending quarantine protocols. The Oilers confirmed the information moments ago.

It is believed general manager Ken Holland will be forced to make a move to get help in between the pipes in Edmonton as the Oilers lost their number three netminder, Anton Forsberg, a few days ago when they had to place him on waivers.

He was claimed by the Carolina Hurricanes, who started shopping him almost right away. He was therefore placed back on waivers on Thursday by the Canes, and some folks expected the Oilers to grab him back. However, another Canadian team went on and got him off the waiver wire, as the Winnipeg Jets claimed Forsberg off waivers on Friday at noon. Many thought Edmonton wouldn’t hesitate to get him back as their third-string goalie is currently Stuart Skinner, a prospect with zero NHL experience and just under 50 games under his belt at the AHL level.

They were too late and now they need to go shopping.

Some pundits believe Holland might go back to one of his former players as netminder Jimmy Howard remains a free agent at the moment. Based on his final season with the Detroit Red Wings, the 36-year-old may no longer have the goods, but Skinner remains unproven at the moment and Howard is potentially an upgrade.

For now, this is Mikko Koskinen’s net for the foreseeable future, but there is no doubt a move is coming to Edmonton.

Sens put Chlapik on waivers, but no one can claim him!
Subscibe to
Our NEWSLETTER
Receive the best articles of the web directly in your email