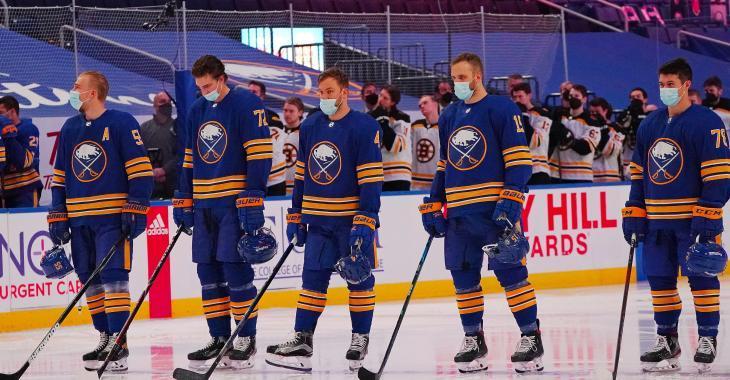 The Buffalo Sabres are just getting started. Earlier today, they traded veteran forward Eric Staal in exchange for 3rd and 5th round picks in the 2021 NHL Draft. The Sabres will absorb some of his salary, by retaining 50 pour cent of his contrat, which is $1,625 million of Staal’s AVV of his $3.25 million deal.

According to team insider John Vogl for The Athletic, the Sabres are now sending a clear message to rival clubs: we are open for business.

And the fact that they accepted to retain salary in the Staal trade is a good sign.

“The subterranean Sabres need to do everything in their power to move their pending unrestricted free agents for assets. With cap space and actual dollars at a premium this season, Buffalo’s willingness to eat money in order to facilitate deals could be key to getting trades done.”

More pending free agents are in Buffalo can could be on the move shortly: Taylor Hall, Brandon Montour, Tobias Rieder and Riley Sheahan and goalie Linus Ullmark.

Vogl says it like it is: If teams aren’t calling Adams, he needs to call them. The Staal trade shows the phones are working.

Staal had to formally waive to agree to the deal with the Habs. Montreal was among the 10 teams on his no-trade list, per TSN’s Pierre LeBrun.

A similar scenario would come if a Hall trade is in the works. Hall has a full no-movement clause and can squash any deal. After last night loss, Hall revealed he would for sure listen if approached by GM Adams that another team is interested in trading for him before the deadline.

Things are heating up in Buffalo and we’re not just talking about the weather! Like Vogl concludes his article: A few more trades will make that happen. They’re coming.

Max Domi is back on the trade block, to be moved again!
Subscibe to
Our NEWSLETTER
Receive the best articles of the web directly in your email