NHL News : Molson Export brings home the nostalgia in its return as the official beer of the Montreal Canadiens. 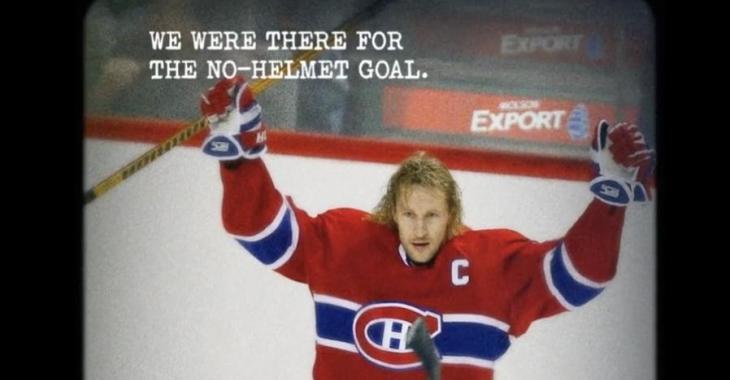 If there is indeed one thing that fans of the Montreal Canadiens can unite around it is nostalgia, and Molson Export has shown that they understand that very well. In an advertising campaign launched over the last few days, the Molson Coors brewing company has announced that it would be extending its partnership with the Canadiens franchise, making Molson Export once again the organizations official beer sponsor.

If you've been moving around the city of Montreal recently you may have seen signs featuring some of the great moments in Habs history. From the hosting of the Stanley Cup in 1986 to their historical and improbable comeback against the New York Rangers to the famous no helmet goal scored by Alexei Kovalev. Molson has always been behind the success of the team, both literally and figuratively.

If you happen to cross one of the detachable signs in Montreal, make sure that you take one for yourself to bring home all the while raising a can of Molson Export in honor of those great memories and for those yet to come.

Molson Export is proud to be brewed right here in Montreal. Molson has been a proud sponsor and fan of the Montreal Canadiens, while their beer has been inexorably linked to the team, almost without interruption, since 1957.

Here are the 4 posters that have been featured as a part of this most recent campaign:

Their victory in 1986 with rookie goaltender Patrick Roy capturing the Conn Smythe Trophy.

Their most recent Stanley Cup, from 1993, where Marty McSorley's illegal stick turn the series on its head.

The epic comeback in 2008 against the New York Rangers, where captain Saku Koivu played the hero in the shootout, beating Henrik Lundqvist. Cristobal Huet stopped the attempt from Jaromir Jagr at the other end of the ice to seal the greatest comeback in Canadiens history.

The no helmet goal from Habs star Alexei Kovalev, against the Bruins in 2008.

It is a wonderful homage to the past and what a great job on the part of Molson to bring back these beautiful and emotional photos that showcase some of the most memorable moments in Canadiens history. A history that, as the background of each photo prominently shows, has always included Molson.

You can win a copy of each of these 4 posters, including one autographed by Vincent Damphousse, by participating in the contest on our Facebook page.

Good luck and good health to you all!