NHL News : Milan Lucic, in his 1,000th game, drops the gloves, gets busted wide open but then drops Sabourin with a bomb

Honestly one of the best scraps of the season. Looch's still got it.

Published on Wednesday, April 14 2021 by HockeyFeed in NHL News 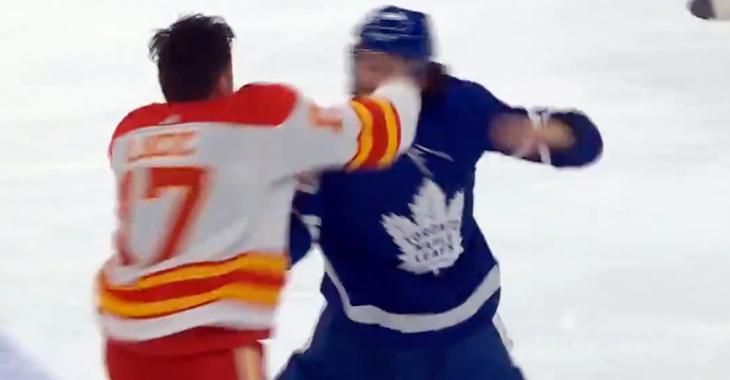 In case you missed it last night, Calgary Flames forward Milan Lucic suited up for his 1,000th career NHL game. And, wouldn't you know it... Looch made sure it was a memorable one. Not only did he chip in an assist in the Flames' 3-2 OT win over the Toronto Maple Leafs, but he also dropped the gloves in a pretty epic tilt with Leafs enforcer Scott Sabourin.

Lucic takes a pretty big shot and gets busted wide open, but comes back with a HEAVY right hand that takes Sabourin down to the ice.

Those are two big boys going round and round. You love to see it. Frankly though, I'd love to see more of this from Lucic. It sounds awful but he's at the stage of his career where he can't contribute much offensively, but if he could bring this element to his game more often he'd be a real asset to the Flames.