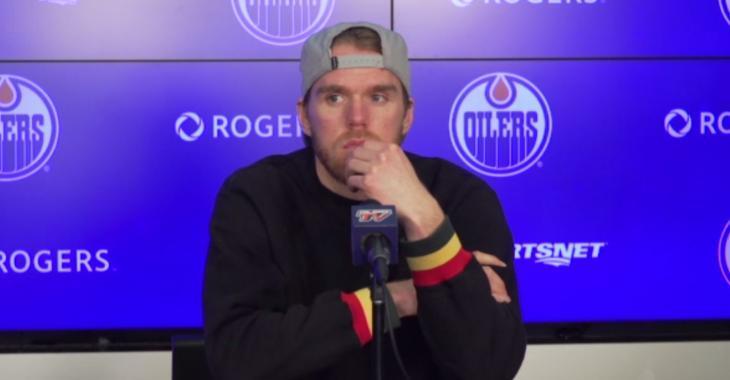 It did not take long for the Connor McDavid trade rumours to emerge right after the Edmonton Oilers’ playoff elimination at the hands of the Winnipeg Jets on Monday night.

The Oilers were swept in four games, and players met with media members in a long press conference on Tuesday to, unfortunately, relive the pain of this short-lived playoff experience. Another one for McDavid… The Oilers, who were eliminated in the qualifying round by the Chicago Blackhawks last season, have won just one playoff series since reaching the Stanley Cup final in 2006.

However, McDavid found all the right answers on Tuesday, sending a clear message to his management and fans as he didn’t dodge any question from the press. He is focused on a future in Edmonton and is looking forward at what general manager Ken Holland can make happen with the pending free agents.

“Obviously, it’s a big off-season. We’ve got a lot of decisions to make. Well, I don’t have to make them - the higher powers do.

“We have a great core here. Leon and Nursey, Nuge, Lars. These are guys that I’ve kind of grown up with and we want to see this thing thru together, and we want to do this thing right as a group. It feels like we’re lightyears away, but we’re a lot closer than it feels today.”

The captain also added how confident he feels in the young players coming up to support the core group of players in his dressing room, along with "outside help that'll come in, that will help propel this team forward."

He was abundantly clear when it came to asking a trade out of Edmonton to get a chance elsewhere at the Stanley Cup.

“That’s not the case at all. We have a great core. We want to see this thing through together.”

We should all remember how long it took a great player like Alex Ovechkin to hoist the Stanley Cup and how the Oilers will need to support their captain with important moves this offseason.

Then, maybe history won’t repeat itself and McDavid will have a clear shot at the Cup.

For now, he can only have this clear message and let’s hope everyone, including Holland and the rest of management, has heard him.

Acciari pulls most incredible shot-blocking sequence in history as he eats so much rubber!
Subscibe to
Our NEWSLETTER
Receive the best articles of the web directly in your email